Astronomers love to point their telescopes at the Ring Nebula. Located 2,000 light years away in the constellation Lyra, this... 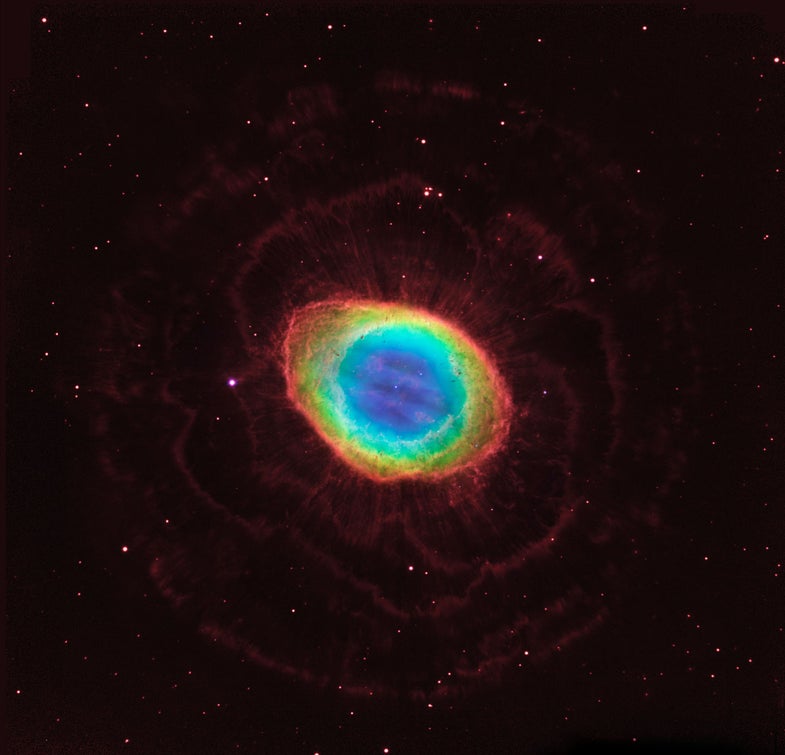 Astronomers love to point their telescopes at the Ring Nebula. Located 2,000 light years away in the constellation Lyra, this ring of glowing gas has a distinctive elliptical shape when seen from Earth. But new images captured by the Hubble Space Telescope suggest that the nebula actually looks a lot more like a football or a misshapen doughnut.

Scientists now believe that the blue and green gaseous material at the center of the ring is a large football-shaped region sheathed by a ring of cooler gas (the yellow and orange ring) at its fattest point near the center. So the ends of the hotter football-shaped gas cloud protrude from either end of the ring, and we’re looking directly at the end of the football, so we see the enveloping cooler gas as a ring encircling the hotter blue/green gas.

What does all that mean? If you’re an astronomer it means you have a better understanding of the Ring Nebula. That in turn provides insight into the way our own sun’s nebula will form in another six billion years or so when it runs out of fuel, sheds its outer gasses, and collapses in on itself (it won’t look like this because our sun isn’t as big, but nonetheless there will be similarities). For the rest of us, it means look at that amazing image of the Ring Nebula!