A new maser that can work at room temperature and without any powerful magnets could usher in a new age... 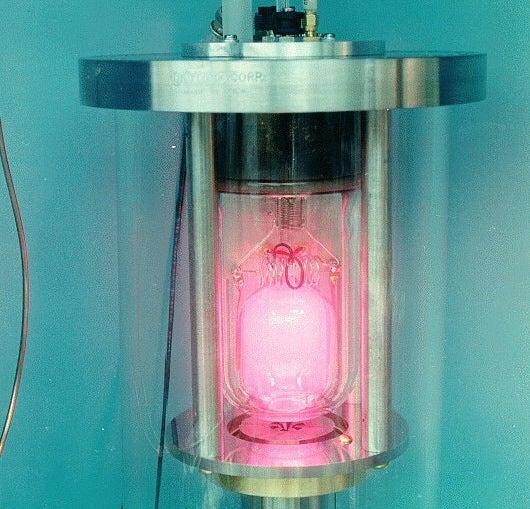 A new maser that can work at room temperature and without any powerful magnets could usher in a new age of masing instead of lasing. It may be good timing, as the next generation of lasers could be the most powerful lasers to ever lase. Now this new device could be the simplest maser to ever mase.

Masers are like lasers except they amplify microwave energy instead of light beams — MASER is an acronym like laser, and it stands for Microwave Amplification by Stimulated Emission of Radiation. Scientists developed the first ones more than 50 years ago, before they ever developed lasers.

The problem has been that masers require extreme conditions in order to work. Most of them amplify microwaves by using hard crystals, often rubies. The devices also need powerful magnetic fields as well as ultra-low pressures, which requires vacuum chambers and pumps, or super-cold temperatures, aided by special refrigerants that can approach absolute zero. This new maser, designed at the National Physical Laboratory in the UK and Imperial College London, doesn’t need those extreme conditions. Instead of a ruby, which only works at extremely cold temperatures, this one uses something called p-terphenyl, which needs to be doped with pentacene. It can complete the same masing-amplification process as a ruby. The pentacene also happens to turn the colorless crystal a brilliant pink color, which the NPL news release could not help but point out. Because then it looks like a ruby!

The pentacene-containing p-terphenyl maser could make it much cheaper and more efficient to mase, which means masers could become a lot more common. They might be useful for medical scanning devices, chemical sensors, radio telescopes or read-out mechanisms for quantum computers, the NPL scientists say.

“For half a century, the maser has been the forgotten, inconvenient cousin of the laser,” said Mark Oxborrow, co-author of the study and a scientist at NPL. “Our design breakthrough will enable masers to be used by industry and consumers.”

The study appears today in Nature.