The U.S. Army tallied 38 confirmed or suspected suicides among its ranks last month–that’s among both active- and non-active-duty members... 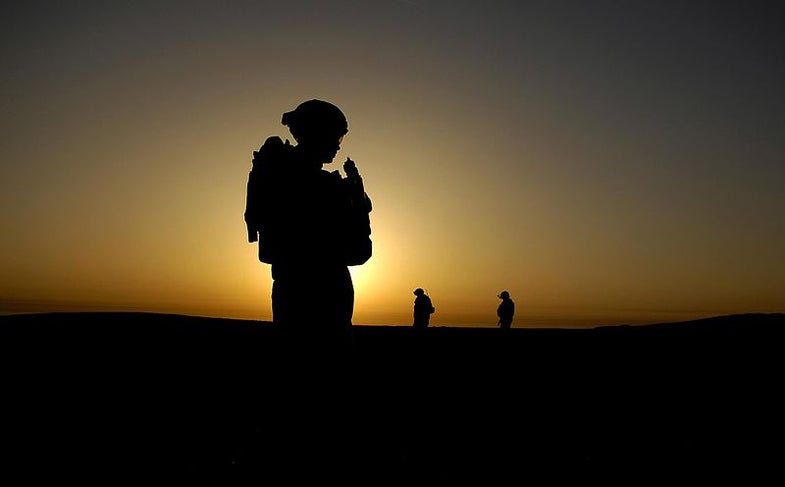 The U.S. Army tallied 38 confirmed or suspected suicides among its ranks last month–that’s among both active- and non-active-duty members including the Army National Guard and Army Reserve–the highest rate of suicide within the branch yet observed, further underscoring a mental health crisis that the services have yet to get a handle on. But help may be coming in an unlikely form: nasal spray.

The Army is funding a study into a new kind of treatment for soldiers wracked by suicidal thoughts that could deliver anti-depressive chemicals to the brain via the nasal passages. Thyrotropin-releasing hormone, or TRH, is a neurochemical that has proved an effective anti-depressant and anti-suicidal treatment in previous research. But it has trouble crossing what’s known as the blood-brain barrier, that natural boundary that keeps the nervous system free of potentially harmful substances in the bloodstream. This barrier keeps TRH away from the brain when administered orally or via injection, making it largely useless in the case of a soldier dealing with very immediate suicidal thoughts.

The military is thus throwing its money and its hopes behind Associate Professor of Anatomy and Cell Biology Dr. Michael Kubek, who is also a neurobiologiest at the Indiana University School of Medicine. The three-year grant aims to develop a non-invasive nasal spray that soldiers can administer themselves to quickly deliver TRH to the brain.

If it works, it could help curb a mental health problem that has proven deadly to U.S. military personnel, and one that is more difficult to approach than, say, an IED. Last year the Army reported 283 suicides, down just slightly from 305 the year before. This year it has reported just 120 to date, but 67 other deaths are suspected suicides still under investigation. More on this over at CNN.