We’ve covered some pretty amazing coronal mass ejections (CMEs) here on PopSci, but we might have to crown this one... 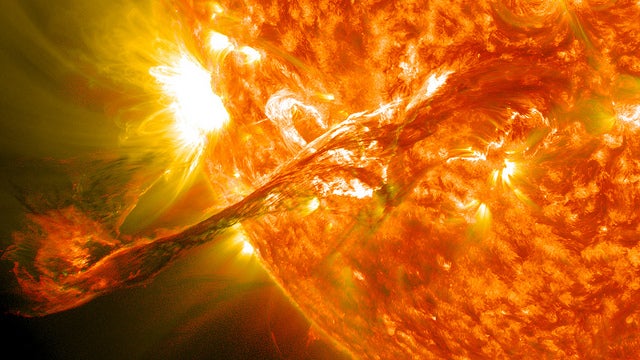 We’ve covered some pretty amazing coronal mass ejections (CMEs) here on PopSci, but we might have to crown this one the best yet. Blasting forth from the solar surface at 900 miles per second on August 31, it was captured in all of its tendril-esque glory by NASA’s Solar Dynamics Observatory (SDO).

If the image doesn’t look real, rest assured that it is. But the SDO clearly doesn’t capture imagery of the sun in the same way the human eye does. This image is a blended version of the 304 and 171 angstrom wavelengths. I couldn’t begin to tell you why those are the proper wavelengths to capture this sort of thing, but I will endorse the choice. This is one magnificent image of our local star.

Oh, and though you would’ve heard about it by now if this particular CME posed any threat to the home planet, you can also rest assure it does not. It was not directed toward Earth, though it was close; it interfered with our magnetosphere enough to cause auroras to appear on the night of September 3. Which is as close as you want a solar eruption like this to get.