Today in pretty space pics, Cassini proves once again that it’s the spacecraft that just keeps on giving. Its mission... 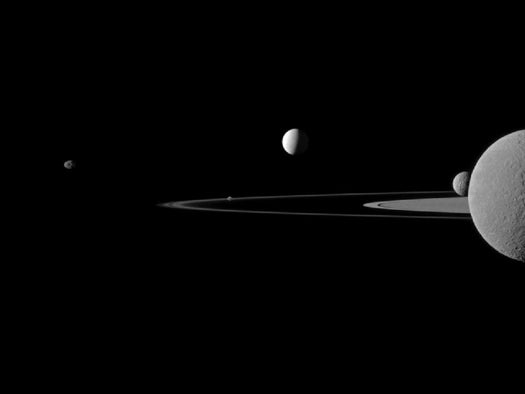 Today in pretty space pics, Cassini proves once again that it’s the spacecraft that just keeps on giving. Its mission was supposed to end in 2008 but has twice been extended, most recently out to 2017. That’s fine with us, since it keeps sending back pics like these from its wide orbit around arguably the solar system’s second-coolest planet. Represented here: Saturn’s signature rings and five of its more than 60 natural satellites–Janus, Pandora, Enceladus, Mimas and Rhea (from left to right).

NASA released the image yesterday, but it was actually captured (in visible green light) by Cassini back on July 29. To give a little perspective, Cassini was just 684,000 miles from Rhea (looming large at the far right) but 1.8 million miles from Enceladus in the center, which is actually beyond the rings. That’s Pandora hiding between the rings, second from left. And for a bit more perspective, the image scale is about 4 miles per pixel, says NASA.

Suffice it to say, that’s a pretty big panoramic right there. Cassini wanted to get the other 60 or so moons into the shot as well, but you know what a pain it is to organize group photos.