At Last, The First Humanoid Robot Astronaut Powers Up Aboard the ISS

Our favorite Twitter ‘bot–no, like an actual robot that tweets–is out of the box and live-tweeting its new life on... 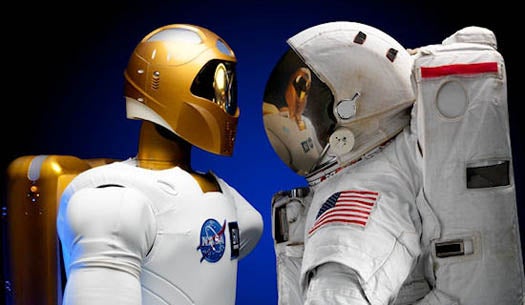 Our favorite Twitter ‘bot–no, like an actual robot that tweets–is out of the box and live-tweeting its new life on the International Space Station. Robonaut 2 was actually unboxed several months ago (it was delivered by the final Discovery mission in February) but has been sitting idly, waiting for the crew to get around to firing it up. Now R2 is plugged in, and man is it ever chatty.

“Those electrons feel GOOD!,” R2 tweeted yesterday as its visual systems were powered on. “One small step for man, one giant leap for tinman kind.”

Har har. But humanoid humor aside, this is a big step for those who have been following R2’s progress from the labs at NASA to his launch aboard Discovery to his arrival at the ISS (R2 has been tweeting all of this along the way). It is the first humanoid robot ever taken into space, and he very well could be the model for many future generations of humanoid helper ‘bots launched aboard orbiting spacecraft and perhaps even on a future deep space mission. Along the way, future versions of R2 may even assist ISS astronauts during spacewalks.

Right now, R2 is only a waist-up humanoid; his torso is anchored to a pedestal from which he can use his arms to help human crew members in the orbiting lab. But a pair of legs is being designed for R2 and could launch to the ISS in 2013, at which point it will become something of a real life C-3PO capable of following around its human counterparts, getting into all kinds of scrapes, and providing somewhat flat comic relief.