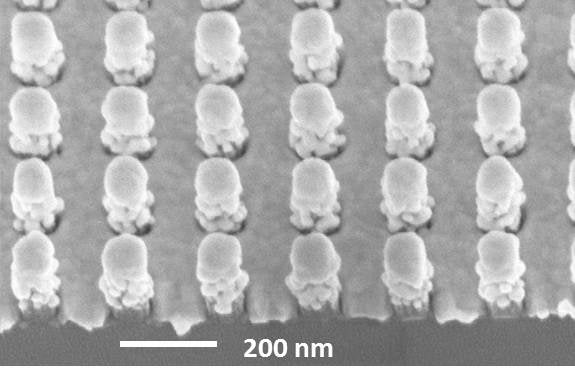 A new type of sensor can identify substances as small as a molecule by examining the light they reflect, potentially leading to sensors for a wide range of substances, from explosives to cancer.

The DARPA-funded sensor uses a chip full of metal pillars to boost the light signals bouncing off an object. It’s a billion times more sensitive than was previously possible, according to researchers at Princeton University.

It’s a major advance for Raman scattering, which examines light reflecting off an object to determine its molecular composition. Researchers have been trying for decades to tease out these light frequencies, but it’s hard to see them even with advanced laboratory methods.

The new chip uses arrays of metal pillars, which have small cavities at their bases and tops and a bunch of nanodots on their sides. A molecule to be studied is placed on the chip, and a beam of pure one-color light is focused at it. The cavities trap the light so it passes by the nanodots multiple times, generating the Raman signal more than once. It’s several orders of magnitude more powerful than previous Raman scattering sensors.

The device, called “disk-coupled dots-on-pillar antenna-array” or D2PA, is also easy and cheap to make, according to Stephen Y. Chou, the Princeton electrical engineering professor who led the research team. The chip was described in the journal Optics Express.

Raman scattering has great potential for a variety of fields, and this could make it more widespread, he said.

“We’ve developed a way to significantly enhance the signal over the entire sensor, and that could change the landscape of how Raman scattering can be used,” he said.