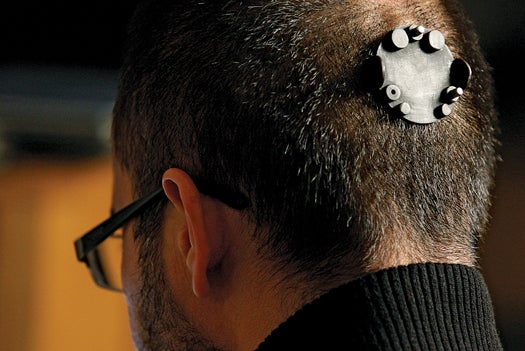 NYU photography professor Wafaa Bilal displays the digital camera mount which he has had implanted in the back of his head as part of a year long art project at his apartment in New York, December 7, 2010. The concept of the project, titled "The 3rd I", is based on the idea of capturing things subjectively, without the interference of a viewfinder, according to Bilal. For the next year, images from the camera will be streamed over the internet and at a museum in Qatar which commissioned this project. REUTERS/Jessica Rinaldi (UNITED STATES - Tags: SOCIETY SCI TECH ENTERTAINMENT ODDLY) PSC0311. © Jessica Rinaldi / Reuters
SHARE

Last December, New York University art professor and technophile Wafaa Bilal had a magnetic camera mount installed in his head in a painful two-hour procedure. The device is held in place by three titanium posts and a subdermal plate placed one fifth of an inch beneath his skin. Once a minute for the next year, a coin size USB camera will photograph the often mundane view from the back of his head—525,948 photos in all, which can be seen at www.3rdi.me.

Although many people he has encountered have questioned the wisdom of his decision (he has to sleep sitting up), Bilal says it only hints at how our gadgets and bodies will meld in the future. He hopes this project will call attention to the constant state of surveillance that has already become the socially accepted norm, but he does cap the lens upon request. “I wanted a way to capture the moments of life that we don’t pay attention to,” he says.

NOTE: Professor Bilal’s body rejected the implanted camera in early February, and had to have part of the apparatus removed.