WISE Captures Runaway Star Sending a Shockwave Through the Cosmos

After losing a fellow star, its longtime companion, a star 20 times more massive than our sun is tearing through... 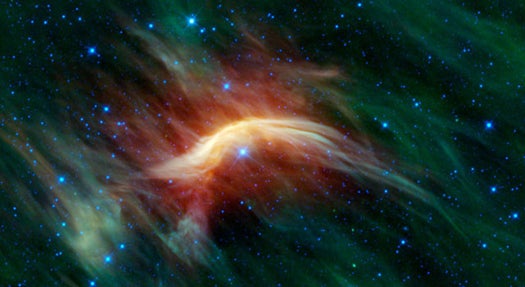 After losing a fellow star, its longtime companion, a star 20 times more massive than our sun is tearing through space on a cosmic bender, leaving a trail of displaced gas and dust in its wake. A new image from NASA’s Wide-Field Infrared Survey (WISE) has captured the runaway star and its impact on its galactic neighborhood and translated the infrared light into visible colors in the image above.

Zeta Ophiuchi, as the star is known, was once happily mated to an even heftier star around which it orbited. But when that star—call it Zeta Ophiuchi’s anchor—exploded in a supernova, Zeta Ophiuchi took off like a runaway freighter at speeds of 54,000 miles per hour.

The rogue star is moving so fast (directionally, it’s headed toward the top-left corner of the image above) that its powerful winds are pushing gas and dust out of its way with such force that they compress and glow with IR light, creating the bow shock you see in yellow above. WISE can capture the glow from that shockwave preceding the star as it hurtles through the universe, creating this beautiful visible depiction.