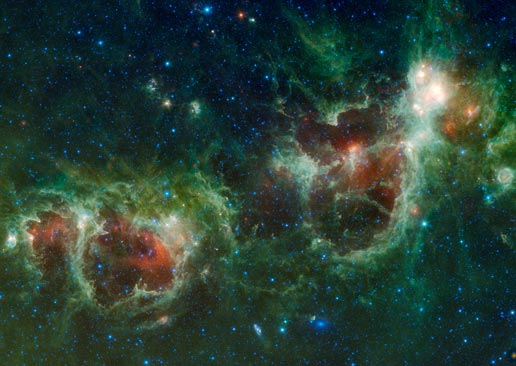 Located about 6,000 light-years from Earth, the Heart and Soul nebulae in the constellation Cassiopeia form a vast star-forming complex that makes up part of an arm of the Milky Way Galaxy. The nebula to the right is the Heart, named after its resemblance to a human heart. NASA/JPL-Caltech/UCLA
SHARE

NASA’s Wide-field Infrared Survey Explorer (WISE) satellite has just completed its first survey of the entire sky viewable from Earth — returning more than a million images that provide a zoomed-in look at celestial objects ranging from distant galaxies to asteroids.

From its orbit several hundred miles above the Earth’s polar regions, the spacecraft scans strips of the sky, always staying over the day-night dividing line. Every 11 seconds, an infrared-sensitive digital camera takes a snapshot over the entire sky.

WISE has already observed more than 100,000 known and previously unseen asteroids. Most of these are located in the asteroid belt between Mars and Jupiter, but some are near-Earth objects that pass relatively close to the Earth. The telescope’s infrared vision also enables it to detect the glow of brown dwarfs, objects with masses between that of planets and stars, and it can also see the brightest of ultra-luminous infrared galaxies.

Less than two months after its December 2009 launch, WISE detected its first comet (named the WISE comet) orbiting about 109 million miles from Earth. Because they are rare in the inner solar system region, comets aren’t as easy to find as asteroids. But WISE’s powerful telescope is expected to find up to dozens of new comets, which will give astronomers new numbers to crunch in determining the probability of one coming close to Earth’s orbit.

WISE will now begin a second full scan of the sky to reveal even more objects and to detect any changes that have occurred since the first survey. In about three months, this second survey will end when the block of solid hydrogen coolant that chills the instrument’s detectors runs out. In May 2011, the astronomical community will have access to the first release of WISE data, which will include over a million images that help researchers catalog astronomical objects and answer questions about how planets, stars, and galaxies develop and evolve. 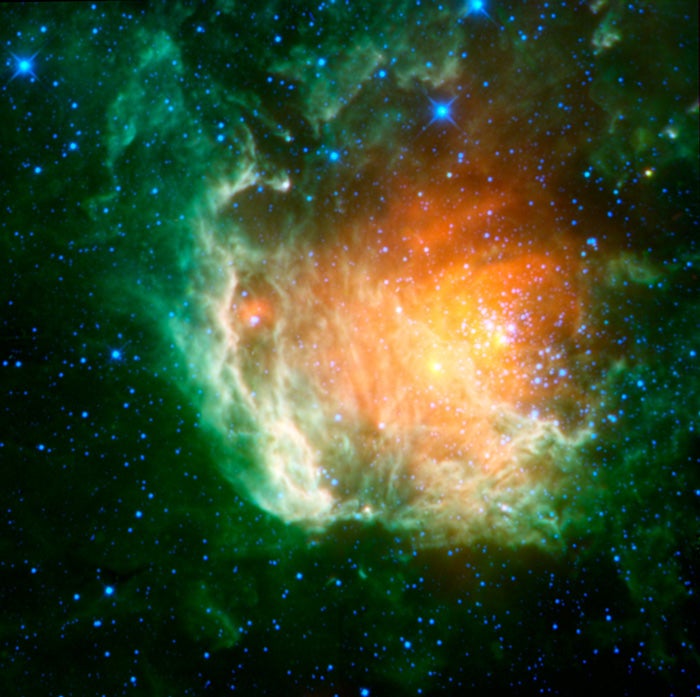 This image shows a “cosmic rosebud” blossoming with new stars in the constellation Cepheus. The stars, called the Berkeley 59 cluster, are the blue dots to the right of the image center and are ripening out of the dust cloud from which they formed. 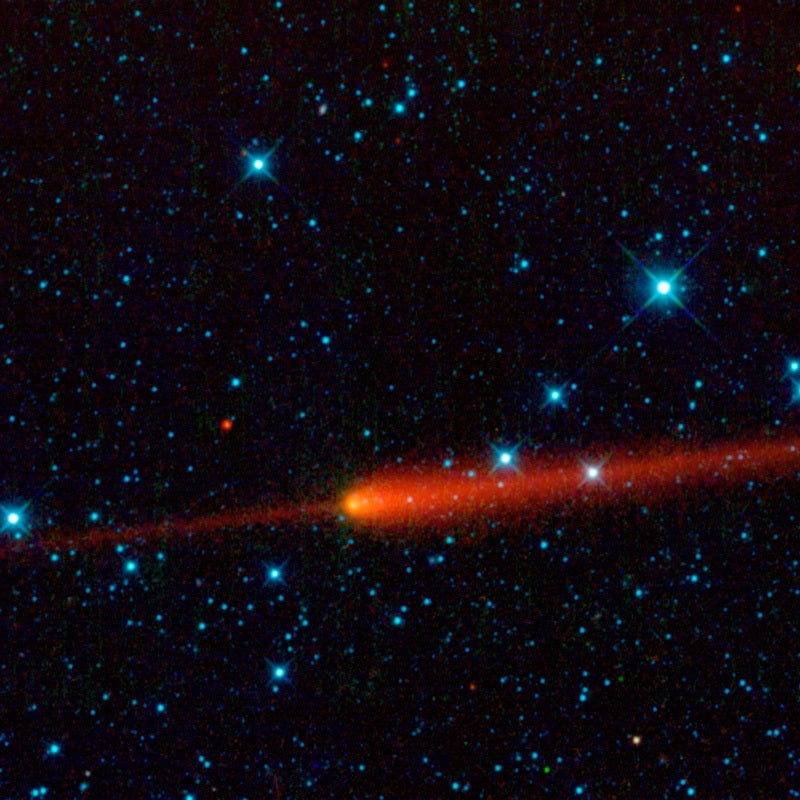 On April 24, 2010, WISE captured this image of Comet 65P/Gunn in the constellation Capricornus. Just ahead of the comet is an interesting fuzzy red feature that makes it look something like a swordfish. The “sword” is a debris trail made of dust particles that have previously been shed by 65P/Gunn as it orbits the sun.

Located about 6,000 light-years from Earth, the Heart and Soul nebulae in the constellation Cassiopeia form a vast star-forming complex that makes up part of an arm of the Milky Way Galaxy. The nebula to the right is the Heart, named after its resemblance to a human heart. 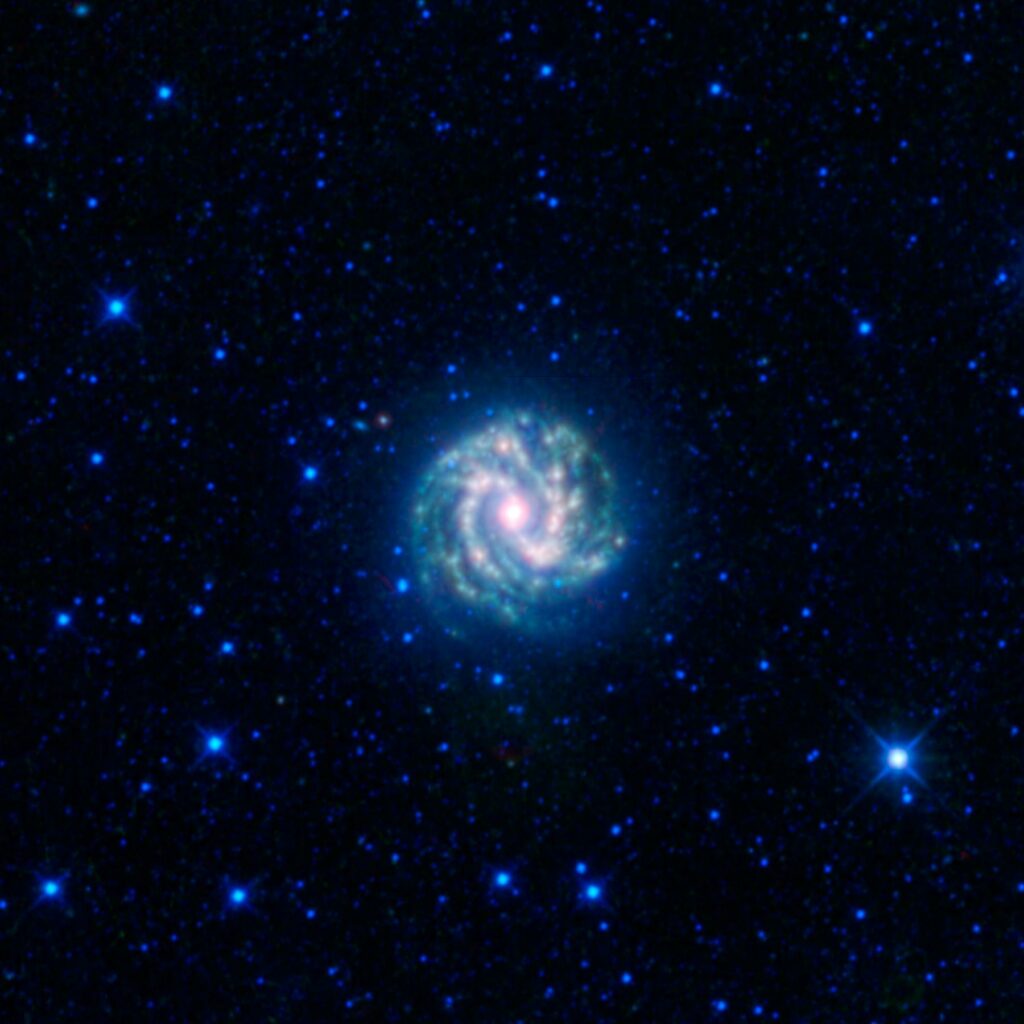 Messier 83, or M83, is a spiral galaxy approximately 15 million light-years away in the constellation Hydra. At about 55,500 light-years across, it is slightly more than half the size of the Milky Way Galaxy. 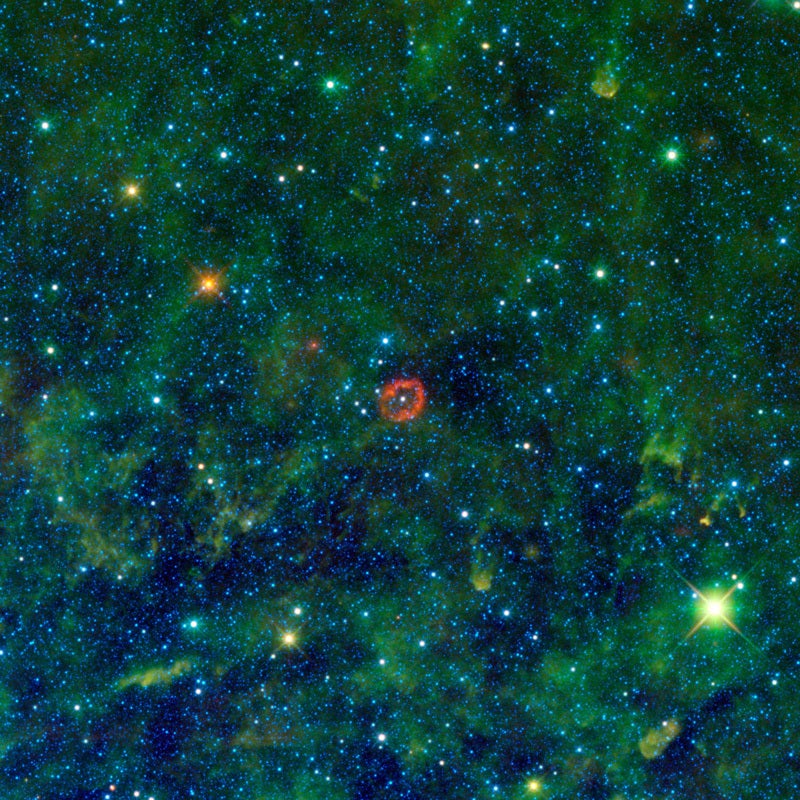 The red-colored object in this June 2010 WISE image is a sphere of stellar innards, blown out from a humongous star. The star (white dot in center of red ring) is one of the most massive stellar residents of the Milky Way Galaxy. 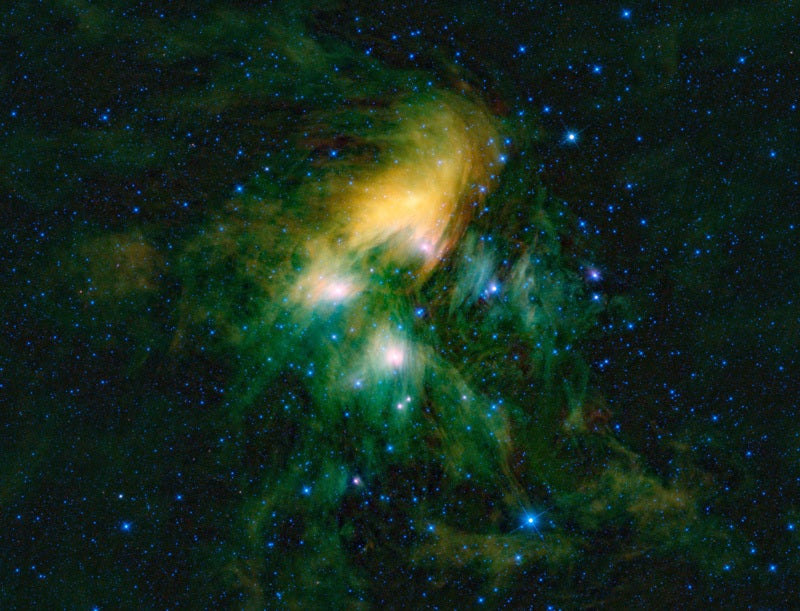 This image shows the famous Pleiades cluster of stars as seen through the eyes of WISE. The Pleiades are what astronomers call an open cluster of stars, meaning the stars are loosely bound to each other and will eventually, after a few hundred million years, go their separate ways. 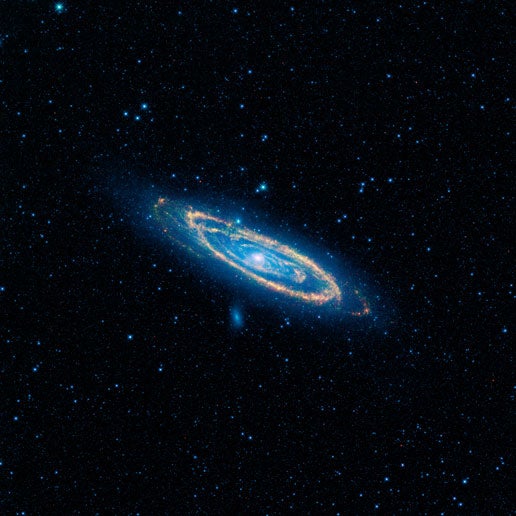 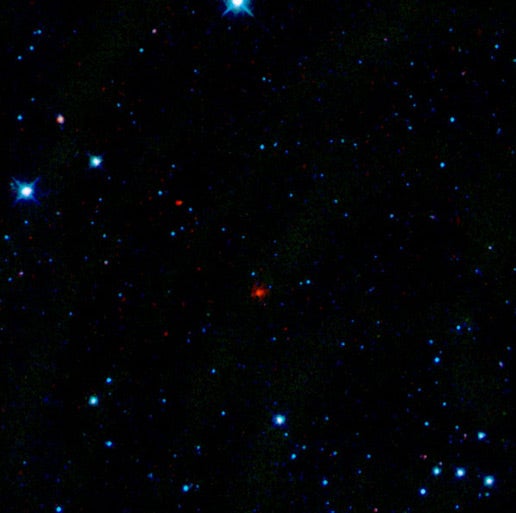 The Comet Known Simply as WISE

The red smudge at the center of this image is the first comet detected by WISE. Officially named “P/2010 B2 (WISE),” but known simply as WISE, the comet is a dusty mass of ice more than 1.2 miles in diameter that orbits the sun every 4.7 years.
astronomy
galleries
imaging
satellites
wise