Next Generation of Moon Rovers May Ride On Canadian Beanbag Wheels

Engineering professors at McGill University have constructed a new type of wheel, designed for the moon but inspired by the... 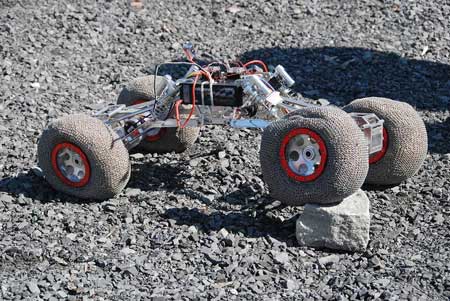 Engineering professors at McGill University have constructed a new type of wheel, designed for the moon but inspired by the humble beanbag chair. These wheels allow a rover to climb objects taller than the wheel’s diameter, as well as functioning as impressive shock absorbers for traversing difficult terrain–great news for those disgusted with the slow pace of the “pave the moon” movement.

The “iRings” wheel (as in “iron rings,” the symbol of Canadian engineering–this is not iPod-compatible) uses a chain-mail-type fabric encasing granular particulate material, which gives it some pretty fantastic properties. Engineers seem to be embracing the philosophy of the beanbag more lately, as seen in the coffee-balloon-handed robot–it allows strength and flexibility of shape at the same time. In the case of the iRings wheels, that translates to wheels that mold to the shape of the terrain, rather than bumping along above it, as traditional wheels would.

Even better, the beanbag wheels absorb shock far better than other types of wheels, reducing the need for a hefty suspension. On terrain as unforgiving as the moon’s, that’s invaluable. You can see in this video (warning: French video popup) that it’s strikingly well-suited for tromping over rocks and such–it’s even able to grip and then climb over objects taller than the diameter of the wheels themselves.

The project is funded by the Canadian Space Agency, part of an effort to build a light lunar rover for future lunar exploration. The final prototype is expected to be completed in the spring of 2012.