A new type of image-manipulation software could help salvage all the home video footage shot during your awkward phase. It... 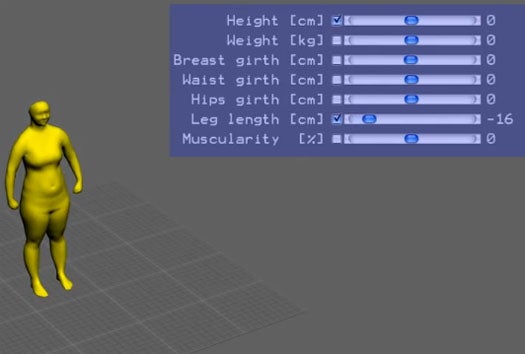 A new type of image-manipulation software could help salvage all the home video footage shot during your awkward phase. It can automatically modify the shapes of human bodies on video, dropping unsightly pounds without burning a single calorie.

Developers at the Max Planck Institute for Informatics in Saarbrücken, Germany compiled 3D scans of 120 men and women of varying sizes, merging them into a single model that can be morphed to any shape and overlaid atop original footage.

The software, called MovieReshape, builds on existing programs that track an actor’s silhouette through a scene, mapping the body into a morphable model. Using the compiled 3D scans, the program can create realistic-looking and moving body parts to the programmer’s specifications. The more dramatic the alteration, the more noticeable it may be against a constant background, but in a survey of 30 viewers, none reported the distortions to be distracting.

At present, the program only works well in clear, unobstructed scenes, so don’t expect to see digitally enhanced actors in every new release just yet. But, as NewSci suggests, it could be a quick solution for advertising companies that currently have to shoot multiple ads to cater to varying international beauty standards.

The program is set to be released at the SIGGRAPH Asia computer graphics conference in December.