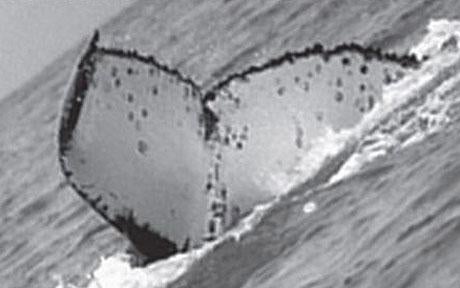 If you think that time you biked from Philly to New York was an epic journey, this humpback whale would like a word with you. She swam from Brazil all the way to Madagascar, probably by way of the Southern Ocean–a distance of about 6,200 miles, the longest documented journey ever made by a mammal.

The whale in question, a female humpback (formally named “Whale 1363,” but which I have decided to name Forrest Gumpback in honor of her travelling spirit), was spotted just off the east coast of Brazil in 1999. The whale was identified by her unique markings on the underside of her tail, which according to Boston.com resemble a face (albeit a fairly abstract one). Forrest Gumpback was then photographed two years later off the east coast of Madagascar, in the Indian Ocean.

Though the journey occurred about ten years ago, it was only recently that the connection between the Brazilian sighting and the Malagasy (that being the demonym for Madagascar, apparently–thanks, Wikipedia) sighting was made. Unusual among marine mammals, humpback whales can be identified by these markings with a high degree of certainty, which makes them a popular species for study. Gale McCollough of the College of the Atlantic managed to catch Forrest Gumpback in slides from both expeditions.

The shortest distance between these two locations is some 6,100 miles, but it’s doubtful that Forrest Gumpback would take that route. Typically, humpback whales will travel south to the Southern Ocean to feed, then north to warmer waters to breed, so it’s much more likely that the whale traveled from Brazil down to the Southern Ocean and then back up the coast of Africa to Madagascar. That’s about 2,500 miles longer than any other documented humpback movement between breeding areas, and even more remarkable because female humpbacks are typically less adventurous than the males.

It’s not clear why Forrest Gumpback would have gone so far out of her way. The waters off the coasts of both Brazil and Madagascar are favorable breeding grounds, and there doesn’t seem to be any particular reason for the switch. Marine biologist Dr. Peter Stevick finds the exploration encouraging, as it “helps them to remain adaptable” to new environments.