The USA Pavilion Is a Disgrace

Many of the pavilions at the 2010 Expo in Shanghai are phenomenal, both inside and out. The USA pavilion, however,... 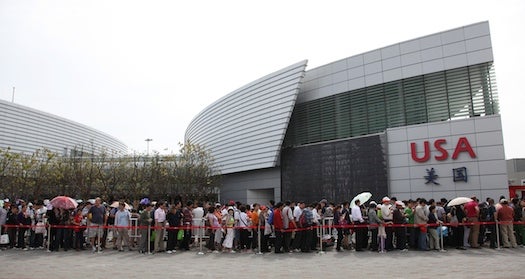 Many of the pavilions at the 2010 Expo in Shanghai are phenomenal, both inside and out. The USA pavilion, however, is neither. But far worse than being visually unimpressive (which it is), the essence of our representation at the largest World’s Fair carries an even sadder message.

I’ve been inside some pretty mind-blowing pavilions this week, which makes the failings of the USA’s–the world’s largest economy–even more shameful.

The pavilion consists of three eight-minute films shown in three different chambers, dubbed “Overture,” “Act One” and “Act Two.” The first, which visitors watch on a few smallish elevated screens while seated on the floor or standing, mostly consists of non-actors on city streets being coached through basic greetings and welcoming messages in Mandarin while they are filmed. Americans off the street are not the best Mandarin speakers, and this is played up in the film endearingly. Many Chinese folks get a kick out of westerners trying their broken Chinese, so the film’s numerous stumbles are received with some laughs from the audience. OK so far. Celebrity appearances are included amongst the Joe Blows, including Kobe Bryant, Tony Hawk, Magic Johnson and, who’s that there? Spokespeople from KFC (the Colonel?!) and Dow Chemical? Hmm.

As subtle as these first corporate inclusions are, things get much worse as we’re ushered into a second, larger room for “Act One.” Hillary Clinton welcomes us to the USA pavilion, and Barack Obama also delivers a by-the-book message of general international goodwill. Then we are treated to a number of talking heads delivering the saprogenic Expo themes of a global community working together, the magical potential of children, harmony with the environment, and so on. Only here, the talking heads aren’t celebrities or other prominent Americans–no, save for a few academics from the University of Washington, every sound byte is delivered by corporate PR reps, many in logo’d polos, all representing the pavilion’s major sponsors.

A spokesperson for Johnson & Johnson’s, who refer to their company as the “Johnson & Johnson Family of Products” talks about–you guessed it–the importance of family. Chevron’s flak advocates the potential of “human energy”–apparently its next untapped resource to supplement the company’s just-announced first-quarter 2010 profits of $4.55 billion thanks to surging oil prices and boosted production. General Electric’s spokesperson advocates for wind energy–an honorable cause, sure, but coming directly from GE in this setting, a little awkward. 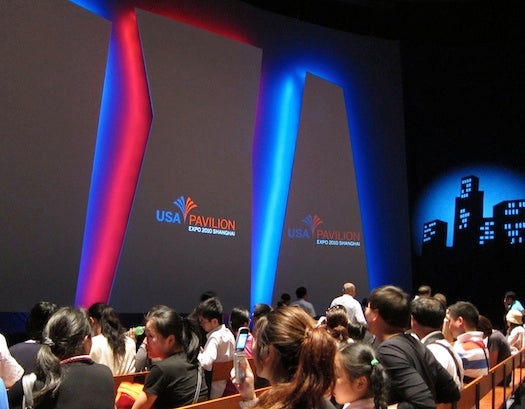 The third film is projected on several larger, unconventionally shaped screens in the final, even larger third room (Shh, don’t tell anyone I took the photo above. I was literally begged to refrain from taking any photos inside by one of the pavilion’s press agents, which is telling in many ways. The pavilion has no tickets to sell, and you would assume nothing to lose from images of its contents being released to the public).

Anyway, the third film portrays a young girl’s quest to turn a run-down lot near her apartment building into a garden, and it’s expectedly oversweet to the pooint of being cringe-worthy, but relatively harmless. Spray-misters in the ceiling kicking in during a rain storm in the film were a nice touch, especially on a hot day. And unless I missed any subliminal messaging, it is free of corporate messaging. 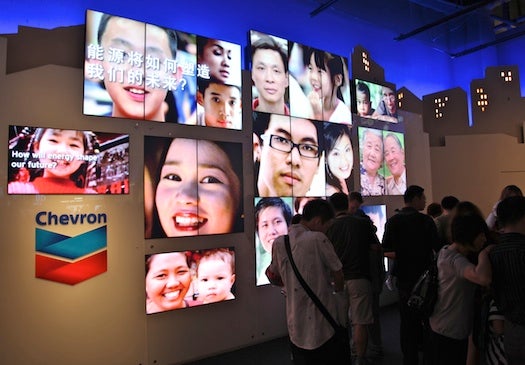 Perhaps I Could Interest You in a Message From Chevron?

The people in the lower right corner are not flocking to the oil company’s message; they’re getting their Expo passports stamped.

Attendees are then disgorged into a room of displays–a few limply interactive, and every one of them 100% advertisements for sponsor companies. A wall full of Visa commercials. Another group of displays with the subtle tag “Motorola’s Innovations Make Your Life Better.” Photos of smiling Chinese farmers in idyllic fields under the heading “Walmart’s Direct Farm Program. Harvesting a Better Life.” After the requisite gift shop, that’s it.

Whether or not the almost entirely sponsored nature of the USA pavilion is evident to most Chinese visitors, I do not know. I can’t imagine it going completely unnoticed, even if the end feeling is one of simply being underwhelmed, especially after an hour plus in line waiting to get in.

But more importantly, is this really the message we want to be presenting at such an event?

In the presence of so many thoughtful, intelligent, beautiful and fun pavilions from other countries (with far smaller GDPs, I might add), ours is an embarrassment. Many other pavilions incorporate sponsors–I’m certainly not decrying their very existence, nor is any of this the fault of the sponsors themelves. There about a thousand more tasteful ways to include products or messages from corporations without jeopardizing the overall experience, and it is the pavilion’s job to do that, which in the end benefits the advertiser as well.

I suppose I shouldn’t be surprised at such a sponsorship hack job, though, when in a column on Foreign Policy’s website defending the pavilion’s somewhat nefarious conceptions story, its director Jose Villareal included this surreal paragraph:

Yikes. That’s 26 corporate shout-outs. In the middle of a column defending his pavilion’s integrity.
World’s Fair pavilions are themselves largely advertisements for the countries and people that built them. The only content inside the USA Pavilion is more advertising, only for corporations, not culture. Is that really the message we want to be sending?