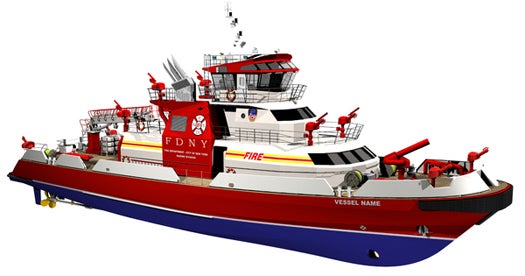 After years of patrolling New York City’s water ways in antiquated, decades-old boats, the New York Fire and Police Departments are upgrading to some of the most technologically advanced vessels this side of an Aegis Cruiser. The modernized boats, a 45-footer for the cops and a 140-footer for the firemen, will give the departments greater range and speed, with the ability to deal with more dangerous situations.

The Fire Department christened their boat “the 343”, after the number of firemen and paramedics who died on 9/11. The 343 is 140 feet long and weighs 500 tons, making it the largest fireboat in the world. The boat has a decontamination shower, pressurized cabins, and specially designed air filters that allow the crew to deal with dangerous chemical spills, a capability conspicuously lacking from the current fleet. The ship’s hoses can spray 50,000 gallons of water per minute, which is the equivalent of 50 city fire trucks, and carries 3,600 gallons of fire-dousing foam. The 343 can make 18 knots (20 miles per hour), and costs $27 million.

Unlike the giant NYFD boat, the NYPD boat is only 45 feet long and built for speed, reaching 45 knots (52 mph) with their Rolls-Royce Kamewa water jet engines. The police’s new craft will automatically right itself if capsized, allowing it to deploy farther out to sea than anything in the current fleet.

As highlighted by last year’s plane crash in the Hudson river, patrolling a coastal archipelago like New York City means cops and firemen need to get wet. With these new boats, New York’s finest will finally have the advanced tools they need to keep the City’s island population safe now, and in the future.