Stars Can Teach Us a Thing or Two about Manufacturing Carbon Nanotubes, NASA Finds 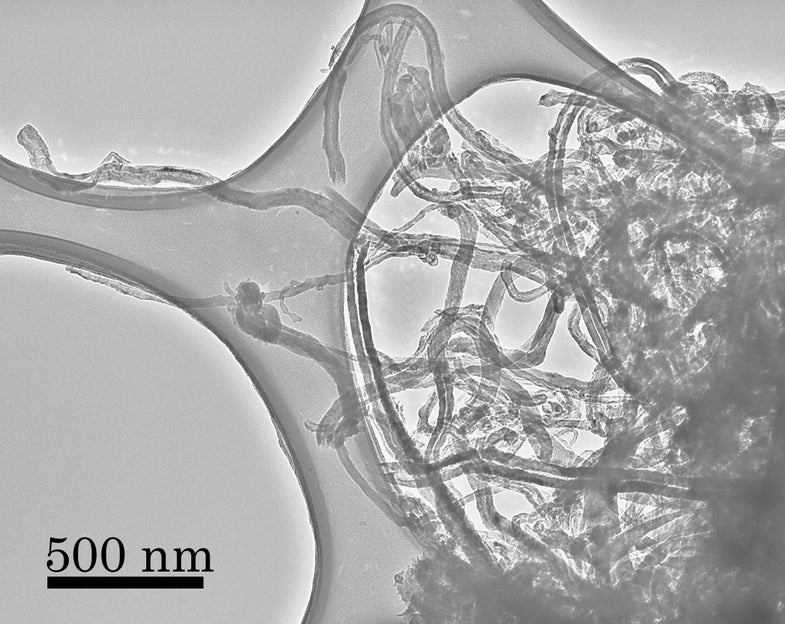 Carbon nanotubes gone wild, or at least grown in an unruly mess on graphite according to "space's recipe.". Yuki Kimura, Tohoku University
SHARE

Carbon nanotubes may push future innovations ranging from self-repairing electronic devices to batteries based on nanotube ink and paper. Now NASA scientists may have uncovered a new recipe for making carbon nanotubes based on interstellar processes.

The tiny but strong carbon nanotubes emerged as the surprising by-products of lab experiments at NASA’s Goddard Space Flight Center in Maryland. Researchers used a mixture that included graphite dust particles, carbon monoxide and hydrogen gases as they tried to figure out how carbon gets recycled after a star dies in a supernova. They published the findings about their surprise chemical reaction in the February issue of Astrophysical Journal Letters.

“I am amazed at the implications of this paper, not only for astrophysics but also for materials science,” says Dick Zare, a chemist at Stanford University in California. “Could Nature know a new chemistry for making carbon nanotubes that we have yet to discover?”

Scientists previously discovered the existence of natural cousins similar to carbon nanotubes, called graphite whiskers, inside three meteorites in 2008. They speculated that a hazy cloud of such graphite whiskers in space might explain why some supernovas appear dimmer and thus farther away than they should be, according to computer simulations.

The latest experimental results with carbon nanotubes show how such graphite whiskers might have emerged, and may also point toward a future method of creating carbon nanotubes. That process is a variation of Fischer-Tropsch synthesis, a well-known way to produce gas or liquid fuels from coal.

If NASA can develop this some more, it could prove a very nice alternative to recycling our plastic bags to make carbon nanotubes — “upcycling” requires a high amount of metal catalyst that the space recipe apparently doesn’t need.