From a tactical military standpoint, land mines have a certain set-it-and-forget-it appeal; you blanket an area in munitions and move... 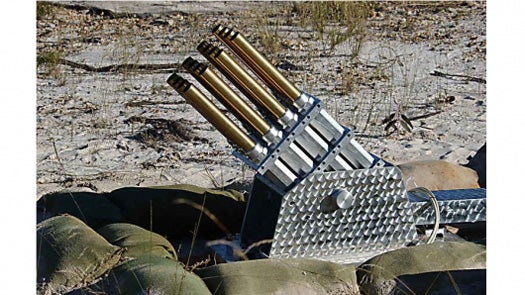 From a tactical military standpoint, land mines have a certain set-it-and-forget-it appeal; you blanket an area in munitions and move on, secure in the fact that if the enemy tries to cross that terrain they’ll find an automated resistance waiting for them. But we all know that land mines are also one of modern warfare’s most indiscriminate and devastating developments, with the capacity to kill and maim innocent people even decades after hostilities have ceased. To remedy this problem, arms maker Metal Storm has developed a virtual minefield that delivers the tactical advantage of land mines without blanketing areas with dangerous ordnance that could be left behind.

Metal Storm employs a computer-controlled electronic firing mechanism that allows for the stacking of several projectiles nose-to-tail in a single barrel (fewer moving parts and an inability to jam are just two of the advantages here). Its virtual minefield emplacement, for which it has just been granted patents, is an array of several barrels akin to mortar tubes or tiny artillery cannons. Each barrel can hold several rounds or different types, one on top of the other.

The innovation is in the very first round in each barrel; when the unit is deployed, each barrel first fires out a wireless sensor which serves as the “mine.” The sensor has no lethal capability of its own, but when triggered the barrel to which it belongs can deliver live ordnance directly to the site of the sensor. By launching an array of sensors over a swath of territory, a single virtual minefield emplacement can autonomously monitor the entire area, delivering deadly payloads directly to areas of incursion without burying explosives beneath the ground.

From a tactical perspective, the virtual minefield is even better than the real deal because it can be turned on and off to allow friendly troop movement across a “minefield.” The computer can even deactivate a specific path through an area to allow troops to move through, reactivating it when friendlies are clear.

But clearly the number one advantage is that it doesn’t leave the kind of carnage-inducing payloads behind that the U.S. and others are still trying to clean up in places like Vietnam, Laos and Cambodia. War is a horrible thing, but since it’s not going away anytime soon, the least we can do is wage it in a manner so that when the fighting is done we can power down the gear and go home without leaving a deadly legacy.