It seems like everyone is trying to make nanomachines these days, usually through some expensive procedure like carving them out... 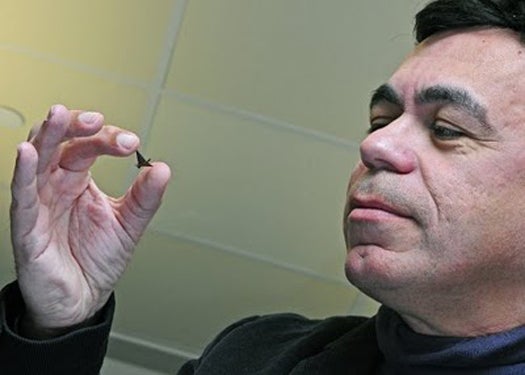 It seems like everyone is trying to make nanomachines these days, usually through some expensive procedure like carving them out of an exotic material with a laser. In an effort to produce cheaper machines, researchers at Purdue University have created a magnetic ink that can be printed onto any paper, instantly turning it into the material for small tweezers or even micro-speakers.

The technique utilizes iron oxide nanoparticles suspended in an oily ink. Once the oil prints out on a piece of paper, the paper becomes magnetic. These magnetic paper components could significantly benefit nano-biological work, as the paper is much softer than metal, so a pair of nano-tweezers cut out of this paper could manipulate a single cell without puncturing it.

As a proof of concept, the Purdue researchers created a tiny magnetic lever, and the operated it by manipulating a magnetic field. Through that small demonstration, they showed how this material could be used to create a wide range of micromachines on the cheap. Additionally, the resulting lever was 100 times less expensive than an identical machine made out of silicon.

“It is very inexpensive to make,” said Babak Ziaie, a professor of electrical and computer engineering and biomedical engineering at Purdue University. “You put a droplet on a piece of paper, and that is your actuator, or motor.”

[Purdue University, via Next Big Future]