Counterfeiting is as old as money itself, with the history of currency including a millennia-long arms race between mints and... 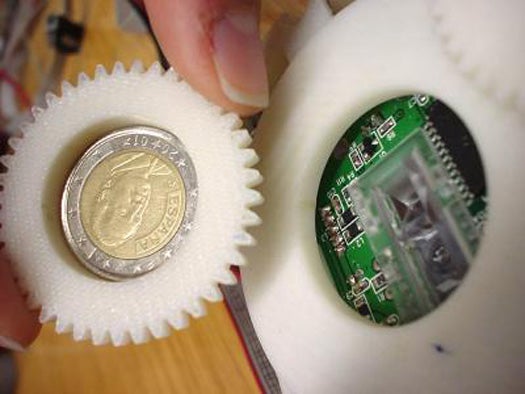 Counterfeiting is as old as money itself, with the history of currency including a millennia-long arms race between mints and the forgers that copy them. While governments have finally crafted paper money so intricate that counterfeiting isn’t a major problem, detecting counterfeit coins remains a challenge. Now, Spanish scientists have modified a regular optical computer mouse to create a cheap and easy device for sniffing out phony Euro coins.

The device utilizes the sensor on the mouse to detect the minute details etched into the surface of the coin. The user loads a coin into the detector, which then references the coin against a database of legit currency. The sensor can detect even the slightest mistakes on the engraved map of Europe on the back of every Euro coin, making it easy to detect all but the most perfect facsimiles.

The mouse modification is cheap and easy, and the researchers who invented it say the same technique can be applied to webcams, too. So far, the device is only designed to analyze 2-Euro coins, the currency that makes up 79 percent of all counterfeit coins in Europe, but expanding the range would only require updating the database, and making a different sized coin holder.

However, this discovery also raises another interesting point: Who the hell counterfeits coins? That seems really heavy, and paying for everything in change is a surefire way to arouse suspicion.