In February, the Ministry of Defense (MOD) in Great Britain unveiled its plans for modernizing its military. Curiously similar to... 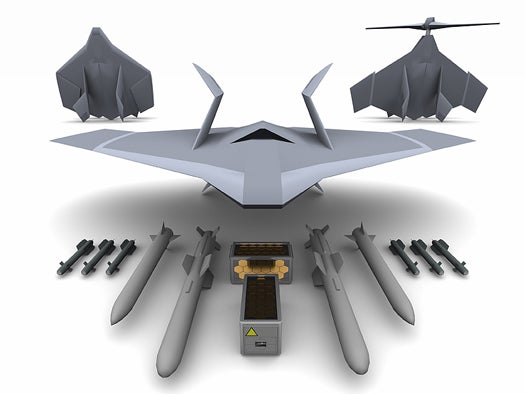 Novel Air Concept 2 GADGETS and gizmos that could provide a front-line force for troops of the future have helped to launch the MODÕs new Defence Technology Plan. The Defence Technology Plan is the first time the MOD has unveiled its long-term research needs. It underlines the importance of science and technology in providing cutting-edge kit for the battlefield. MoD
SHARE

In February, the Ministry of Defense (MOD) in Great Britain unveiled its plans for modernizing its military. Curiously similar to the US Army’s recently killed Future Combat System, the British program looks to bring a new generation of unmanned vehicles, advanced sensors and energy weapons to the battlefield.

However, unlike its American counterpart, it looks like this project is a go.

The MOD has opened bidding for the chance to produce one of the centerpiece projects of their modernization program, the Novel Air Concept. The Novel Air Concept is a proposed UAV that can transition between plane-like forward flight and helicopter-like hovering, utilize energy weapons, and work in an urban environment. Additionally, the MOD wants a flying prototype ready for testing by 2012, with an operational model ready by 2015.

The US has recently tried to shift its acquisitions away from Cold War-era projects designed to fight the Soviet Army, and towards technology useful in the current conflicts, and the emphasis on the urban applications of this UAV indicate the British have made a similar change. Hopefully, if this UAV gets operational sooner rather than later, they’ll let us borrow a few of them.

[Aviation Week, via The Register]