Already had COVID-19? You still need a vaccine.

The vaccine can reduce your chances of becoming reinfected and sick again in the future. 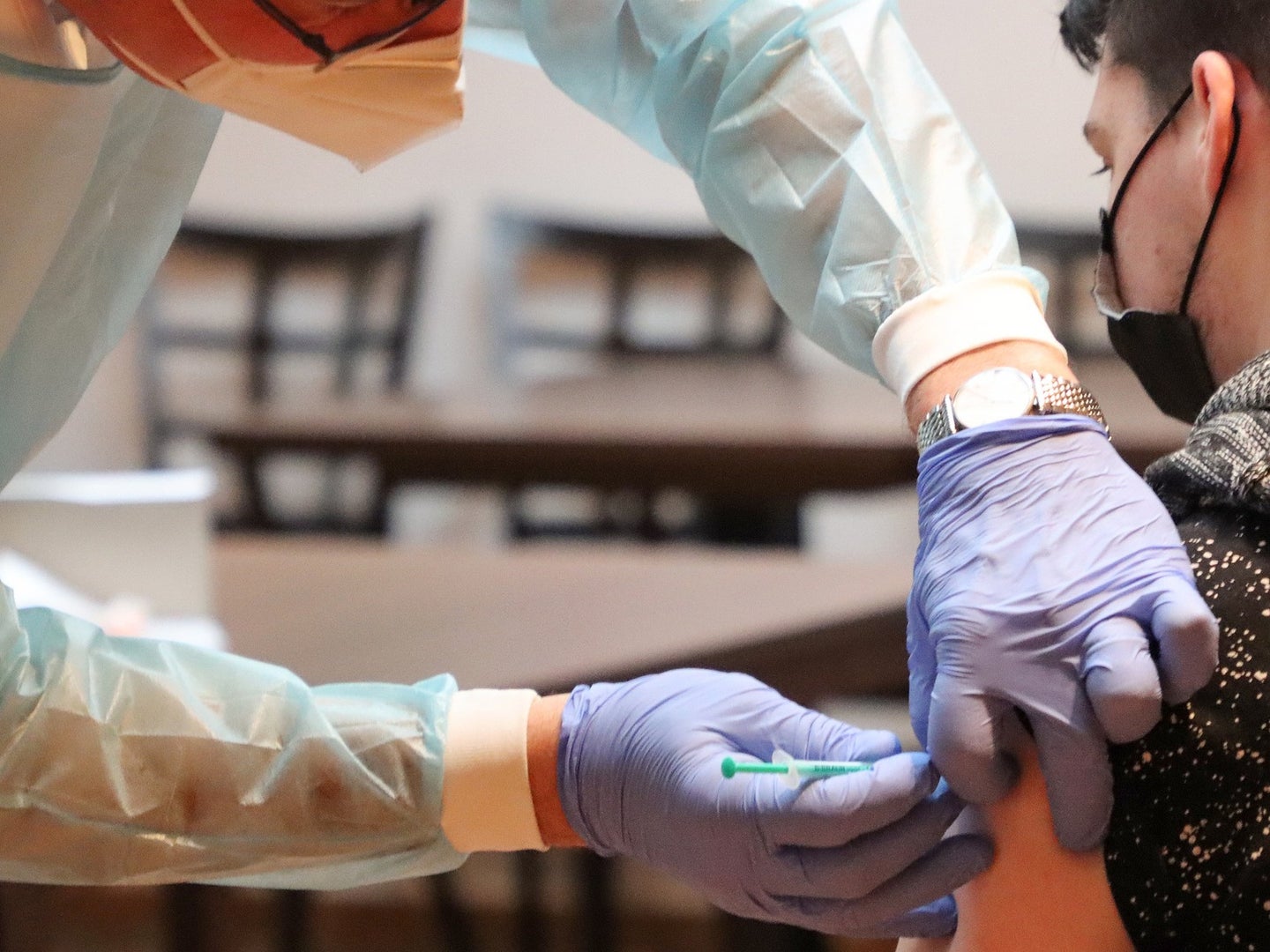 The United States has now reached more than 23 million documented cases of COVID-19 (and likely even more that went uncounted), representing roughly 7 percent of the nation’s total population. Given the disease’s wildfire spread throughout the country, over the next few months, many people who have already had COVID-19 will have the chance to get vaccinated. The Centers for Disease Control and Prevention advise that people should still get vaccinated even if they’ve already had COVD-19. Immunologists agree: A vaccine is likely more predictable at generating an effective immune response than natural infection. Here’s why.

“A lot of times after someone has recovered from COVID-19, they are somewhat protected against getting the infection again,” says Ellen Foxman, an immunologist at the Yale School of Medicine. “However, the vaccine was designed specifically to block infection, and when you have a natural immune response, sometimes it results in really good protection against the second infection, but sometimes it doesn’t.”

This means that even if you’ve had COVID-19, the vaccine will boost your immunity and reduce your chances of becoming reinfected and sick again in the future. “People who have the natural infection may actually be more susceptible to reinfection than if they have the vaccine,” says Cynthia Leifer, an immunologist at Cornell University. For some other diseases, vaccines are known to prompt a more protective immune response than the actual infection, including HPV and tetanus.

Researchers are still working to understand how the immune system reacts to the new coronavirus, SARS-CoV-2. When scientists have examined the blood of COVID-19 survivors, they detected antibodies and several kinds of immune cells at least eight months after people had first developed symptoms. These included cells that produce antibodies and a kind of white blood cell called killer T-cells that seek out and destroy infected cells that have succumbed to the virus. Still, scientists don’t know for sure what levels of antibodies or T-cells are needed to protect a person from SARS-CoV-2, or when immunity begins to wane (to the point where protection from reinfection is lost) after someone recovers from COVID-19.

“This whole instance of the virus being around in the human population is one year old,” Foxman says. “That is part of the issue; we don’t know how long these responses last because we haven’t even had time to observe it.”

Cases of people becoming reinfected with COVID-19 have been documented but are rare, which is an encouraging sign. However, in those rare cases, people can carry high amounts of the virus in their nose and throat, scientists recently reported, which suggests they may be able to transmit it to others.

A small proportion of people don’t seem to generate a very robust immune response after catching COVID-19, Leifer says. There are several reasons why this might happen. Some people with mild infections may not need to marshal a significant immune response to fend off the virus, Foxman says.

Another possible explanation is that a person may fail to generate enough neutralizing antibodies—those that bind to the virus and successfully prevent it from infecting host cells. Although the immune system creates antibodies that recognize multiple parts of SARS-CoV-2, the crucial antibodies are those that home in on the spike-shaped protein on the virus’s surface that helps it invade cells. “Sometimes your body forms a great protective defense, and sometimes it just doesn’t by the nature of which part of the virus it happened to respond to,” Foxman says. While most people do produce antibodies to the spike protein after catching COVID-19, she says, “we’re not 100 percent sure that that happens in every case, nor do we know how long it lasts.”

Researchers have found that the COVID-19 vaccines developed by Pfizer and BioNTech and by Moderna cause people to generate higher levels of these neutralizing antibodies than are seen in people recovering from SARS-CoV-2. “Scientists went in and looked at which part of the virus is the most important for the body’s defenses to block in order to prevent infection, and they made the vaccine just against that part,” Foxman says. “So it’s really engineered to elicit a protective immune response.”

Both the Moderna and Pfizer vaccines contain snippets of genetic information called mRNA that code for the spike protein. When a person is vaccinated, their own cells use these instructions to build copies of the spike protein, which cannot cause disease on their own but train the immune system to recognize SARS-CoV-2 in the future.

During an actual infection, by contrast, you are exposed to the entire live virus. “Pathogens often have ways to mess with our immune system to evade or subvert immune responses,” Leifer says. There’s some evidence that SARS-CoV-2 can interfere with immune processes in the lymph nodes and spleen in ways that might prevent the immune system from “remembering” the virus if it sees it again.

“When you have a vaccine, none of that is there,” Leifer says. “You still see…the genetic material for one protein that the virus expresses, but you don’t have all of that confounding stuff going on where the virus is trying to mess with the immune response.”

Right now, the new coronavirus is spreading so rampantly that, even if only a small percentage of infected people fail to develop immunity, many people will encounter the virus a second time and some will be reinfected. The COVID-19 vaccine, however, may avert this by acting as a booster, much like the tetanus shots that adults are recommended to get every 10 years. “It would be an opportunity to generate more memory and more robust antibody responses that maybe didn’t perfectly develop if you had the natural infection,” Leifer says.

Scientists aren’t sure yet whether vaccinated people may avoid falling ill but become briefly contagious if they’re exposed to SARS-CoV-2. However, a person who has developed a robust immune response will probably quash the infection very quickly and thus “shed” much less virus than someone who hasn’t been vaccinated or who failed to mount a good immune response during their first infection. So even if you’ve had COVID-19 before, getting vaccinated may reduce your chances of transmitting the virus to someone else if you encounter it again.

If you currently have COVID-19, you should wait until after you’ve recovered and no longer need to isolate yourself before getting vaccinated. Additionally, since most COVID-19 survivors seem to have immunity for at least a few months, the CDC has said that people might consider choosing to delay vaccination for up to 90 days after their initial infection.

“I do think that it’s a balance because there is limited vaccine supply right now, so at the moment probably people who have had COVID before are more protected than people who have had no exposure whatsoever,” Foxman notes. “But later on, when there is a lot of vaccine available, it would make sense to get that vaccine so you could be protected.”

For COVID-19 long haulers, whose symptoms such as fatigue and fever persist for weeks or months, the answer isn’t as clear-cut. Researchers aren’t sure yet how these people will respond to the vaccine. One concern is that the vaccine could exacerbate the ongoing immune response potentially causing these people’s lingering symptoms, Leifer says. However, she and Foxman emphasize, there isn’t enough data yet to know whether this scenario will actually happen.

“It’s pure speculation at this point,” Foxman says. “I would land more on the side that you probably don’t want them to get COVID again so you should just get the vaccine unless there was strong evidence that you shouldn’t.”

There’s also a lack of data right now on how safe and effective mRNA COVID-19 vaccines are in people who have received monoclonal antibodies or convalescent plasma to treat their illness. These treatments involve giving a sick person’s immune system a boost using antibodies produced by other people who recovered from COVID-19 or that were made in a lab. The CDC recommends waiting at least 90 days to get vaccinated to give these antibodies time to clear out to make sure they don’t interfere with the vaccine’s ability to prompt a good immune response.

Even if you’ve had COVID-19 before, it could still take your immune system some time to ramp up after getting vaccinated. “Once you have that first shot, you’re not walking out there with a Captain America shield around you; you need to wait to give your immune system time to process that vaccine and generate the immune response,” Leifer says. Another thing to keep in mind, she says, is that “there is occasionally an individual [who] even if we immunize them might not generate a great response, and so don’t just walk around assuming you’re impenetrable.”

It’s also important to remember that, because this disease is so new, most people are still vulnerable to infection. “We need really high levels of immunity in a population to prevent additional outbreaks,” Leifer says. “Even after [vaccination] we should still mask, wash hands, and distance until we have enough people in the population who are immune or immunized, and hopefully we’ll get there this year.”