Some browsers are better for your laptop than others

Google Opera from the Edge of your seat while you’re on a Safari, looking for the elusive Firefox. 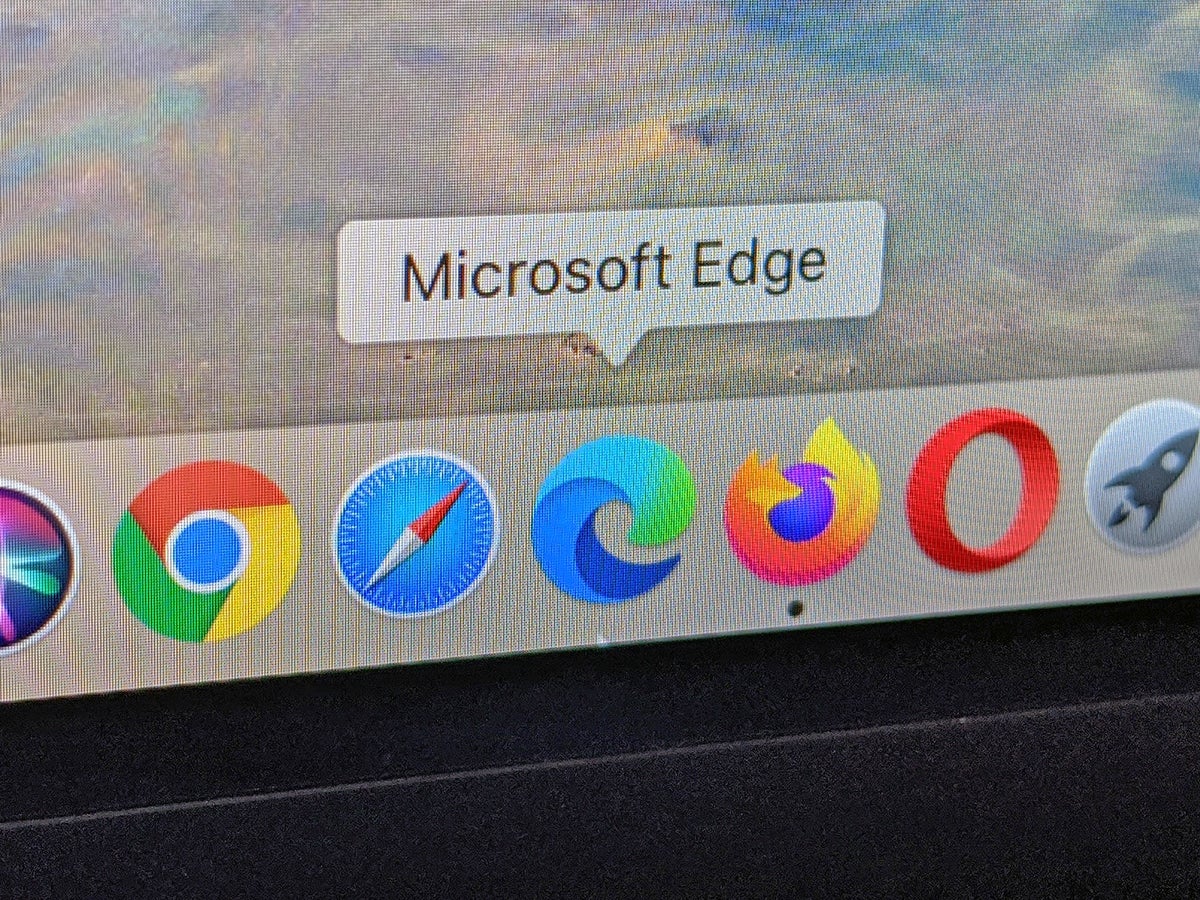 You've got a host of web browsers to choose from. We don't recommend using them all at once. David Nield
SHARE

With Microsoft recently unveiling its redesigned and rebuilt Edge browser, you might be wondering if your web-surfing tool of choice is, indeed, the best of the bunch. Yes, they all get you online, but they’re each different in their own way.

While we can’t cover every single browser—the selection is a lot bigger than you might realize—we can talk about how Edge, Apple’s Safari, Google Chrome, Mozilla Firefox, and Opera help you navigate the web. You might just find the browsing grass is greener on the other side of the digital fence.

These five browsers offer the same basic features, including tabbed browsing, a private browsing mode, options for remembering your passwords, bookmark management, and the ability to sync data between devices. Rather than mention these features in every section below, we’ve tried to focus on the ways each one sets itself apart.

Bear in mind that web browser benchmarks aren’t always a definitive measure of a browser’s speed—other factors, from internet connection quality to underlying computer specs can influence the results—but they’ll give you a rough guide.

Edge is back and, Microsoft says, better than ever. The company essentially stripped out some of the browser’s less-useful features and rebuilt it using Google’s Chromium software (which Chrome is also based on). Those changes alone make Edge a more compelling option than ever.

We like the control Edge gives you over the new tab page: It gives you quick access to your bookmarks, frequently viewed pages, and a search box, but you also have the option to view the latest headlines (from the Microsoft News network, of course). It keeps you right up to date with what’s happening online.

Microsoft has implemented anti-tracking features thoughtfully as well. You can pick between three options: basic, balanced, and strict—depending on how tolerant you want to be of tracking cookies. You’ll see them as soon as you open the settings page, so you won’t have to spend a long time scrolling through menus. We also like the built-in immersive reader, which cuts out ads and other page clutter and will even read articles to you.

It’s fair to say Edge is still a work in progress, but it’s easy to import browsing data (such as passwords and bookmarks) from other browsers, so switching is straightforward. We should also mention that it is compatible with extensions made for Chrome, so there’s a huge library of add-ons to tap into.

Analysis: While Edge performed well with Basemark, its WebXPRT score suggests Microsoft’s engineers still have some optimizing to do when it comes to getting Edge working with the latest web code.

Apple is no longer actively developing Safari for Windows, but it’s the default choice on macOS. It’s also the one you might gravitate toward if you’re using Apple hardware—especially as it works seamlessly across iPhones, iPads, and Macs (by letting you pick up Safari pages on one device that you have open on another, for example).

Safari also scores highly for protecting users against online tracking. It disables cross-site trackers by default, and uses artificial intelligence to try to spot advertisers’ attempts to track your activities across multiple sites. One other feature we really like is its reading list, where you can save articles you want to check out later.

As far as overall design is concerned, Safari doesn’t look quite as polished or as modern as some of the other browsers here, and tab management isn’t quite as intuitive. Apple’s browser is also way behind Chrome and Firefox in the number of third-party extensions and add-ons you can use for customization.

Like a lot of Apple products, Safari sticks to Apple’s preferred way of doing things, and that’s going to be fine for a lot of people (especially those using Apple devices). For others, Safari might feel a little too restrictive.

Analysis: Safari’s low Basemark score makes sense because Apple doesn’t really do web apps, but its good WebXPRT performance shows the browser quickly processes most of the web code it comes across.

Just as Safari works best with Apple devices, Chrome works well with web apps and other Google products. For example, it taps into Google Translate to turn websites into a language you can understand and comes with the built-in ability to send tabs to a Chromecast device on the same Wi-Fi network.

Another advantage of Chrome is that it has the largest library of extensions, as developers are attracted to the idea of coding for the world’s most popular browser. You can pick up a whole host of add-ons from Chrome that allow you to customize how the new tab page appears, check your spelling as you type, switch all websites to a dark mode look, and pretty much anything else you can imagine.

Of course, Google makes its money with targeted advertising, and so is keen to keep tabs on your browsing activity in whatever ways it can. Google says this data is securely locked away and only used to serve up more relevant ads for you, but the sheer volume of data-mining avenues Google has can still be off-putting for some people.

If you can live with Google’s privacy policy and spend all your time in Google apps, Chrome is a good choice for your default browser—it’s packed with features (try searching for “weather” or running a calculation in the address bar for an instant result), it excels at managing tabs, and it’s everywhere.

Analysis: Chrome’s gold medal performance on Basemark (just ahead of Edge), isn’t surprising, considering the number of web apps Google makes. But its comparatively low WebXPRT score shows it might not be the speediest of browsers right now.

Opera has been providing an appealing alternative to the big-name browsers since 1995, so you know you’re getting a piece of software made by people who know what they’re doing. Besides offering an impressive array of features, Opera brings with it a clean and unfussy design that you’ll feel right at home with.

The browser is known for its cool, innovative features—it was one of the first to offer dark and light modes, it gives you access to Facebook Messenger and WhatsApp right from the toolbar, and it comes with its own optional ad-blocker and VPN software. All these extras are free of charge, too.

Another feature synonymous with Opera is the Speed Dial page that many other browsers have borrowed from: It gives you quick access to your favorite sites and bookmarks, and it’s simple to customize. Opera also features a handy battery-saving mode, which cuts down on some non-essential processes to make it less demanding on a laptop.

If you think these extra features are going to be useful and you’re not a fan of Google’s data collection or Safari’s simple style, Opera is an appealing choice. A couple downsides: Its mobile options aren’t quite as good as the other options here, and you won’t get the same sort of tight integration with Google and Apple services.

Analysis: Opera scored near the top of the list on Basemark and at the bottom on WebXPRT, painting a picture of a browser that does some tasks quickly, and others less so.

In 2017, Mozilla gave Firefox a substantial update (codenamed Quantum), which provided the venerable browser with a new look and a faster engine. Since then, it’s been going head-to-head with Chrome and Safari—there’s little that separates these major players at the moment.

Something Firefox has always excelled at is customization. Thanks, in part, to the huge number of available third-party add-ons, you can really get busy when it comes to changing the browser’s look and style. There aren’t quite as many extensions as Chrome, but you’ve still got thousands to pick from.

Another reason you might want to switch to Firefox is that it’s neutral ground. Microsoft, Apple, and Google all want to push you toward their own apps and services, but Firefox isn’t trying to get you to use anything except its browser. It treats all web apps, email clients, and operating systems as equals and has some strong built-in anti-tracking protection, too.

We also like the side projects the Firefox team is working on—projects like Send (for sending large files) and Monitor (for alerting you if your email address is mentioned in a data breach). With strong cross-platform support, all the features you’re likely to need, and consistently good performance, Firefox remains one of the best browsers available.

Analysis: Firefox’s Basemark score is fairly average, but its WebXPRT results are top of the pile—perhaps some of those speed improvements that came with Quantum are really paying off.