But it's not all about the gunfire 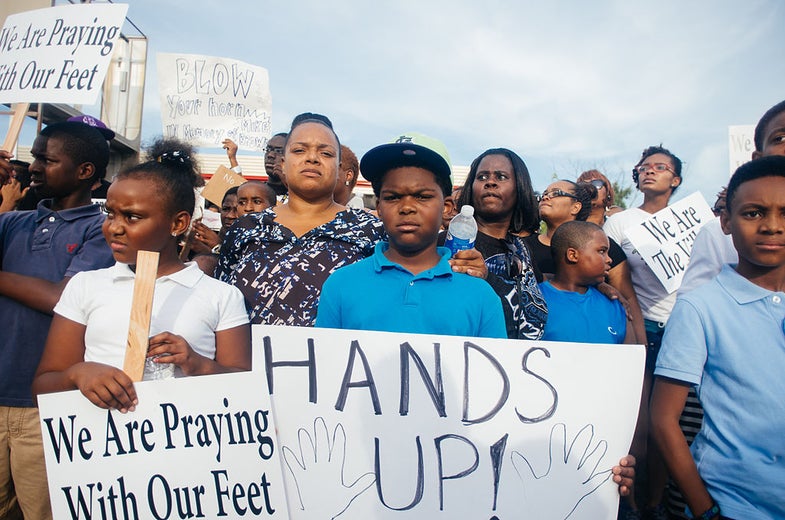 During this exceptionally bloody and heartbreaking month, a Harvard professor turned to his own form of protest to understand police racial bias: data research.

“It is the most surprising result of my career,” Roland G. Fryer Jr., the author of the study and a professor of economics at Harvard, told the New York Times. His findings suggest that while police are more likely to push, pepper spray, aim a weapon at, or handcuff black people, there is little to no difference between who gets shot at more often.

“An Empirical Analysis of Racial Differences in Police Use of Force,” issued this month, examined 1,332 shootings between the years 2000-2015. Fryer and his team looked at suspects’ race, gender, sex, weapons used if any, and injuries from the police. They also considered a swath of other factors including time of day, race of the officers, how many officers responded to the scene, and what kind of call they were responding to.

They also looked to find out if police were more likely to fire on black suspects. In Houston, where they focused much of their research on this particular subject, they found that black suspects were either less likely to be shot at, or there was no difference between white and black. “On the most extreme use of force – officer involved shootings – we find no racial differences in either the raw data or when contextual factors are taken into account,” Fryer writes.

But during stops where the suspect was compliant — not threatening verbally, not arrested, and not displaying weapons — the study found that officers are more likely to use their hands, handcuffs, push the suspect into a wall, or draw a weapon if the person is black.

Fryer recognizes that it’s not just about who’s shot at more often, but the more subtle violences black men and women experience with police encounters. “Who the hell wants to have a police officer put their hand on them or yell and scream at them? It’s an awful experience,” he told the New York Times. “I’ve had it multiple, multiple times. Every black man I know has had this experience. Every one of them. It is hard to believe that the world is your oyster if the police can rough you up without punishment.”

These findings may be surprising in light of recent shootings, but as the deaths of men like Freddie Gray and Eric Garner show, a pair of handcuffs or a chokehold are more than enough to call into question all kinds of lethal force.