German-created steel fasteners can withstand loads of more than 38 tons per square meter, hook and unhook without tools 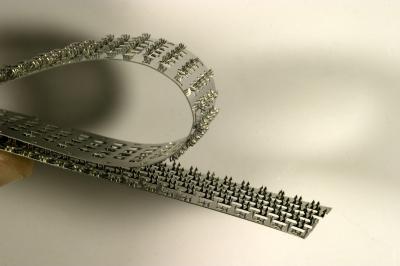 Velcro has proved plenty useful as a quick fastener on shoes and other household items, but lacks the strength to resist fiery temperatures and powerful chemicals in industrial settings. Now German scientists have taken the hook-and-loop fastener concept and developed a Superman version, called Metaklett.

Researchers developed several versions of their new fastener. The “Flamingo” uses wider hooks that deform slightly to glide into the perforated steel tape holes, and then revert to original form and resist back pull like an expanding river. Another model known as the “Duck’s Head” has a more traditional hook and loop system where steel hooks can attach to the perforated loop tape at any angle.

The Technical University of Munich claims that the fastener “can be opened and closed again without the help of any tools,” though just how that works remains unclear. But the concept impressed enough to claim a third place prize in June at the German Steel Innovation Awards.

Perhaps we can all soon look forward to steel Velcro holding together cars and buildings. But people who just want a stronger household Velcro without the ripping sound may want to check out one of PopSci’s 2007 Inventions Awards winners.