As part of a greater effort to someday build computing elements at an atomic scale, IBM scientists in Zurich have...

As part of a greater effort to someday build computing elements at an atomic scale, IBM scientists in Zurich have taken the highest-resolution image ever of an individual molecule using non-contact atomic force microscopy. Performed in an ultrahigh vacuum at 5 degrees Kelvin, scientists were able to “to look through the electron cloud and see the atomic backbone of an individual molecule for the first time,” a feat necessary for the further development of atomic scale electronic building blocks.

Atomic force microscopy employs a cantilever so small that its tip tapers to a nanoscale point. As the microscope scans, the cantilever bounces up and down in response to the miniscule forces between the tip and the sample, generating a picture of the sample’s surface. The pentacene molecule sampled consists of 22 carbon atoms and 14 hydrogen atoms and measures 1.4 nanometers in length, with the space between carbon atoms registering at 0.14 nanometers, or half a million times smaller than the diameter of a human hair. 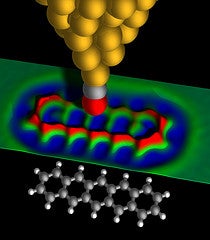 IBM researchers used atomic force microscopy to take the best image yet of a single molecule.

The image should help researchers determine how charge moves through molecules and networks of molecules, which in turn could lead to breakthroughs in building computing elements at the atomic scale. As circuits grow smaller, it becomes harder and harder to break the sub-10-nanometer scale, a benchmark that several research groups are trying to reach. Breakthroughs in circuit board and semiconductor technology involving self-assembling DNA promise to deliver infinitesimally smaller circuits, but reaching atomic-scale computing has thus far eluded researchers.