A stronger, better grip without the incessant ripping sound. Has a long-standing dream finally been realized? 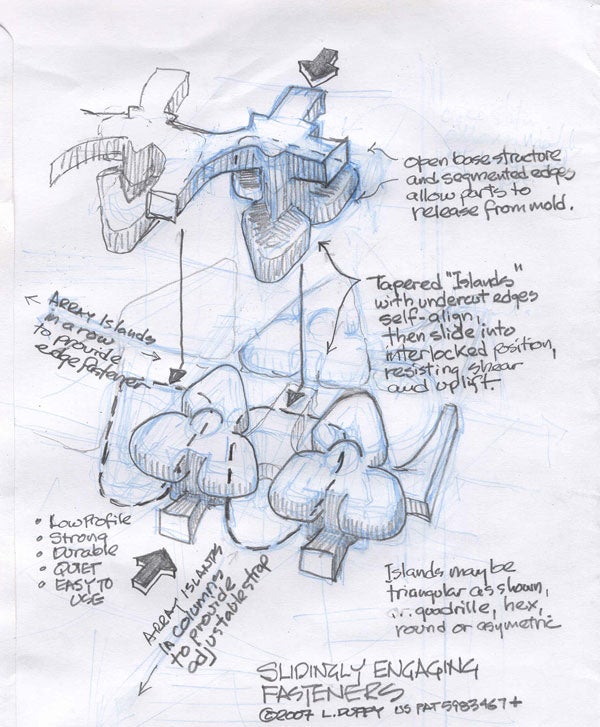 Each plastic strap consists of an alternating series of 1/8-inch-wide perforations and small islands that can be almost any geometric shape. To bind two together, you line up the islands on one with the gaps on the other and snap them tight.

This week, we begin rolling out the winners of the 2007_ PopSci_ Invention Awards. We’ll be doling out a new innovation each day for the next few weeks, so keep checking back for more of what the world’s brightest inventors are currently cooking up. And if you just can’t wait, pick up a copy of the June issue that just hit the stands.-Eds.

In a wooden shed in the Vermont foothills, 66-year-old architect Leonard Duffy has reinvented Velcro. No one has offered a viable alternative to the ubiquitous hook-and-loop closure in 50 years. But Duffy’s “slidingly engaging fasteners” link up easily and silently, don’t wear down over time, and support eight times the weight that the stuff on your jacket can with plastic straps that bind together through matching, interlocking grids of little hexagonal or triangular islands. Duffy has used them to replace the laces on sneakers and the straps on ski gloves and wristwatches and to seal a breathable, waterproof cast he calls the Unitary Wrap.

“I started out trying to reinvent the zipper,” Duffy says. A decade ago, while he was hurriedly trying to close his carry-on at the airport, the zipper broke. “I got mad, and I said, ‘There’s got to be a better way to do this.’ “

His sketchbooks are filled with his ambitions-a redesigned torque wrench, critical improvements to the drywall screw holder, new buildings. He skips work every Thursday to ski, yet when he’s at his desk, he gets so immersed that his wife has to remind him to eat. In 2003 he created an under-the-cabinet cookbook holder that now sells on QVC, but he’s probably forgotten more inventions than he’s finished. While recounting the airport story, an architecture client calls to check on a project. Duffy assures her that he’s on the job. When he hangs up, he confesses, “That’s one I forgot all about.”

After the zipper incident, he spent the next few years penciling out designs and building models, experimenting with foam, cardboard and wood. After a failed presentation to a major manufacturer he won’t name, he realized that his homemade prototypes were too simple, so he plunked down several thousand dollars to switch to injection-molded plastic. Eventually he arrived at the design that exists today and began fastening everything he could with it.

Then his sister-in-law broke her arm. She wore a removable cast held in place by Velcro straps and complained constantly. The Velcro pulled at her clothes and hair and smelled bad as it absorbed moisture and perspiration. Inspired, Duffy created a wraparound cast made from a single plastic sheet sealed with his fasteners. He entered his Unitary Wrap into a NASA-sponsored invention contest called “Create the Future”-he says he did it for the free riveter promised every entrant-and won. Joe Pramberger, who oversaw the contest, says the Unitary Wrap prevailed because it was so practical. “It’s a nice solution to a simple but perplexing problem.” Now a prosthetics company envisions using the plastic straps to attach artificial limbs, and nearly 150 product designers have contacted Duffy after a clearinghouse called Material ConneXion added the item to its library last year.

With all the recent inquiries, this might seem like a good time to come up with a catchier moniker for his innovation, but not to Duffy. “It’s slidingly engaging,” he says, insisting that the name is just fine. “It’s the slidingly engaging fastener.”