Your Next Package Might Be Delivered Via Sewer Pipes

If you live in a big city, you probably know how dangerous bike messengers can be, suicidally zipping in and... 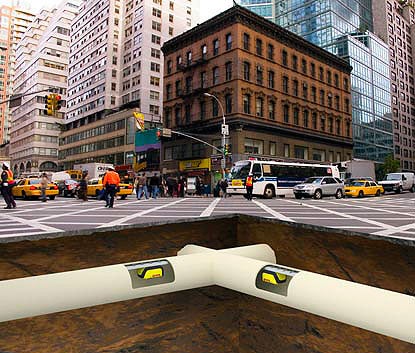 If you live in a big city, you probably know how dangerous bike messengers can be, suicidally zipping in and out of traffic at high speeds and smacking pedestrians in the head with their bike locks. But in a crowded city, if you want a package delivered as soon as possible, they tend to be the quickest option.

If designer Phillip Hermes has his way, though, your packages might be delivered by scurrying underground robots instead. Via the sewer.

Called the Urban Mole, the system would place a bunch of electric railways into the sewer system to shuttle packages around. It could deliver anything up to shoebox size, which would be enclosed in a sealed container to keep from contaminating your payload with other people’s payloads (if you get my drift). The packages would then be dropped off at way stations, or MoleStations, to be picked up.

If you live in New York City, you know that the Second Avenue line will take forever to be completed. Something like this would probably take just as long to setup. I’m all right with that, actually. I think I’d rather get my important documents delivered by a scruffy bike messenger than in a sewer-goo-covered capsule.