A Look Inside the Data Centers of “The Cloud”

Nothing soft, nothing billowy--just row upon climate-controlled and humming row of servers 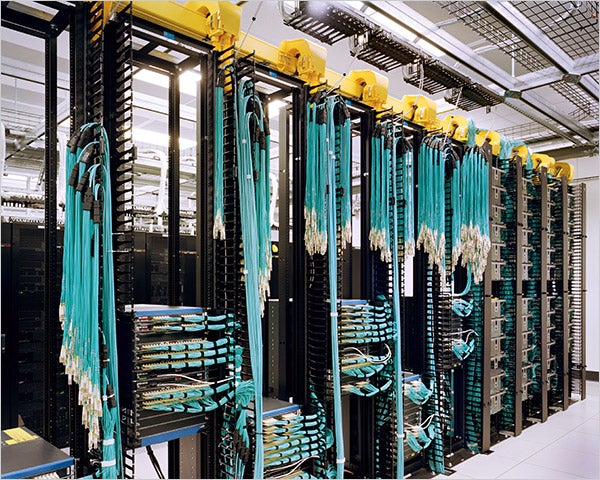 The taking a closer look at something about which we are “inimitably uncurious,” due in large part to its secrecy–the unseen architecture of the data centers powering the Web.

It’s not an entirely new story, but the author, Tom Vanderbilt, sounds like he was able to take a look inside to an extent that’s fairly rare–as companies keep their data centers under deep wraps. He describes the Mission Impossible-worthy biometric scans and series of “sensor-laden multidoor man traps” necessary before entering a Microsoft data center in Washington that is one of the worldwide hubs for Xbox Live. And thankfully he took a photographer with him–the photos from inside are stunning.

• For a normal building, infrastructure costs are usually below 10 percent of the total upfront price. For a data center like the one in Washington, it’s 82 percent, meaning the building itself is effectively a giant computer itself.

• Data centers around the world now consume more energy than Sweden, as a whole. An estimated one to two percent of the world’s total electrical output.

“You can literally walk into that building on the first floor and you’d be hard pressed to tell that building apart from a truck-logistics depot. Once the containers get on site, we plug in power, water, network connectivity, and the boxes inside wake up, figure out which property group they belong to and start imaging themselves. There’s very little need for people.”

Every work of science fiction has its own omnipresent alternative resource industry–moisture farms, spice mines, what have you; It’s clear that the data center’s networked processing power is our equivalent here in the real world, today.