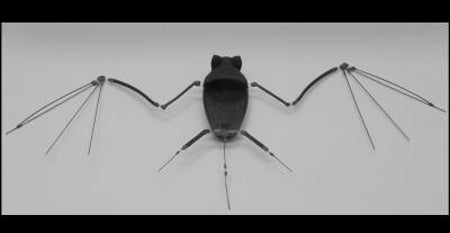 What could be more effective and potentially terrifying than spying on your enemies with robot bats? That what researchers at North Carolina State were thinking when they started working on creating robotic versions of the furry fliers. The idea is to create micro-aerial vehicles, or MAVs, that would be used for surveillance or detection of weapons. However, most MAV prototypes use fixed-wing body shapes, which don’t provide the same level the maneuverability that nature’s flapping wings do. The answer would be robot bats that use innovative technologies that mimic nature’s joint and muscle systems.

The researchers have already created a prototype of the skeleton of the robotic bat, which weighs a skant 6 grams. The next step is to create the joints that connect the skeleton, crafted out of shape-memory metal alloys. The special metals allow for joints to stretch and flex just like the cartilage, tendons, and tiny bones of a real bat’s joints, but always return to their original shape.

To power these joints the team is experimenting with metallic “muscles.” Using an alloy that employs bundles of wires the width of a human hair, the muscles will respond to the heat of an electrical current and contract just like real muscles do. The wire can also quickly change their resistance, allowing them to respond to environmental influences, like wind gusts. Include a synthetic wing membrane and these advancements will help make the robot both light and maneuverable.

The bats could one day be used for surveillance and scouting, and their tiny size will allow them operate in difficult environments like collapsed buildings. But do metallic muscles seem like a little too obvious a gateway to a future robotic world domination? Let’s just hope we have legions of cats on hand to protect us in case they become self-aware.