An exoskeleton that enables paraplegics to walk 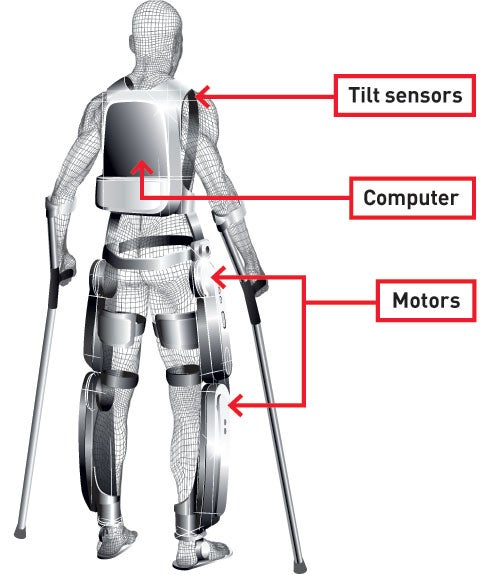 The user plants the crutches out front and leans forward. A sensor registers the motion, and the computer instructs motors in the hip and knee of one leg to swing it forward. Bland Designs
SHARE 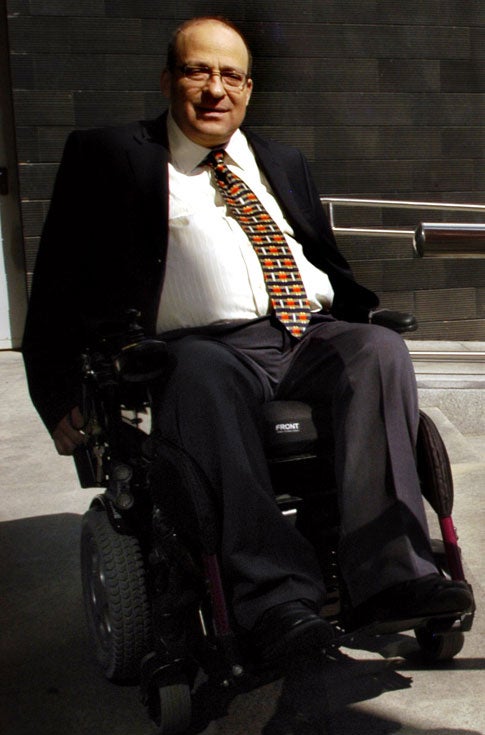 “People didn’t believe me. They’ve been trying to develop these exoskeletons for the paralyzed for 50 years.”

After breaking his neck in a 1997 fall, Israeli engineer Amit Goffer learned that he would be confined to a wheelchair for the rest of his life. He soon concluded that this mode of transportation was outdated and began work on the ReWalk, the only wearable exoskeleton that allows paraplegics to stand, amble, and even climb stairs.

Soon, more than a dozen patients in the U.S. will strap in and start strolling.

Goffer, now 56, needed a design that would be not only safe but also energy-efficient enough to last for an entire day. “I was worried you would need a truckload of batteries,” he recalls. To solve that problem, he made a design choice that meant he could never use it. Goffer is paralyzed from the chest down, but he realized that if wearers could use crutches, it would conserve energy and simplify balance, since the device wouldn’t have to keep the person upright all on its own.

The 44-pound prototype, which takes just a few minutes to get into, has several modes—among them, walking, sitting, and climbing/descending stairs—that the user selects on a wristband controller. Plant one of the crutches and lean forward in walk mode, for example, and a tilt sensor in the ReWalk’s shoulder harness registers the motion. A computer in a backpack interprets this data and instructs electric motors in the hip and knee of one leg to move it forward. (Other exoskeletons, like Honda’s walking-assist device, take cues from users’ actual leg motions or electrical signals in their muscles, which wouldn’t work with paraplegics.) Another plant of the crutches and another lean, and the motors on the other side swing the second leg ahead. Stand up straight, and the
device halts.

ReWalk: How It Works

The user plants the crutches out front and leans forward. A sensor registers the motion, and the computer instructs motors in the hip and knee of one leg to swing it forward

ReWalk allowed Radi Kaiof, a paraplegic, to walk for the first time in nearly 20 years

Like the crutches, many of the components, including the motors and battery pack, are off-the-shelf. Goffer says it’s the control algorithms that make the difference. For example, early in the ReWalk’s development, he and his team found that the tilt sensor could be thrown off by variations in the way users dressed (for example, its angle could be changed if a user wore a large belt buckle underneath the harness), so they wrote software that accounts for those differences and corrects them. The code also has to filter out vibrations from the ground, initiate the most energy-efficient steps so the batteries don’t drain prematurely, quickly recognize a stumble and recover in time to prevent a fall, and more.

Goffer says the next version will be down to about 30 pounds. Several patients have already tested the prototype successfully abroad, and U.S. clinical trials are set to start soon. One of ReWalk’s testers, 41-year-old paraplegic Radi Kaiof, thinks patients will be satisfied. When strapped in, he says, “I speak eye-to-eye with people, not from the bottom up. There is one life in a wheelchair, and this is a new life.”