See the Ripsaw in action: An unmanned beast that cruises over any terrain at speeds that leave an M1A Abrams in the dust 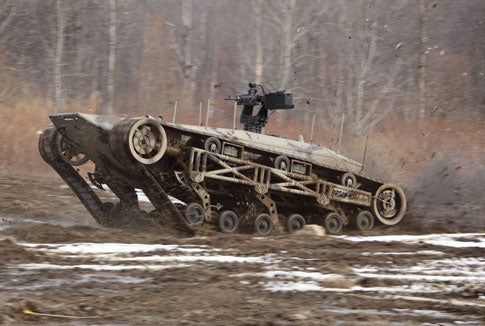 Today’s featured Invention Award winner really requires no justification–it’s an unmanned, armed tank faster than anything the US Army has. Behold, the Ripsaw.

Cue up the Ripsaw’s greatest hits on YouTube, and you can watch the unmanned tank tear across muddy fields at 60 mph, jump 50 feet, and crush birch trees. But right now, as its remote driver inches it back and forth for a photo shoot, it’s like watching Babe Ruth forced to bunt with the bases loaded. The Ripsaw, lurching and belching black puffs of smoke, somehow seems restless.

Like their creation, identical twins Geoff and Mike Howe, 34, don’t like to sit still for long. At age seven, they built a log cabin. Ten years later, they converted a school bus into a drivable, transforming stage for their heavy-metal band, Two Much Trouble. In 2000 they couldn’t agree on their next project: Geoff favored a jet-turbine-powered off-road truck; Mike, the world’s fastest tracked vehicle. “That weekend, Mike calls me down to his garage,” Geoff says. “He’s already got the suspension built for the Ripsaw. So we went with that.”

Every engineer they consulted said they couldn’t best the 42mph top speed of an M1A Abrams, the most powerful tank in the world. Other tanks are built to protect the people inside, with frames made of heavy armored-steel plates. Designed for rugged unmanned missions, the Ripsaw just needed to go fast, so the brothers started trimming weight. First they built a frame of welded steel tubes, like the ones used by Nascar, that provides 50 percent more strength at half the weight. 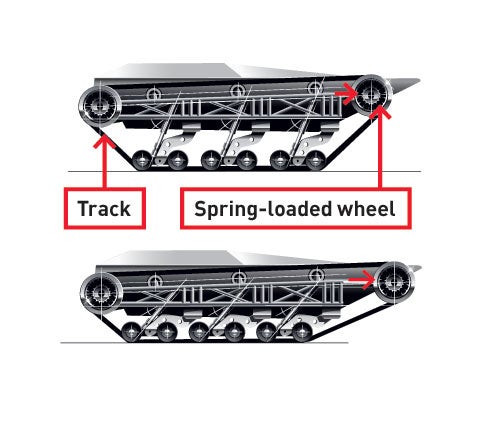 Ripsaw: How It Works

To glide over rough terrain at top speed, the Ripsaw has shock absorbers that provide 14 inches of travel. But when the suspension compresses, it creates slack that could cause a track to come off, potentially flipping the vehicle. So the inventors devised a spring-loaded wheel at the front that extends to keep the tracks taut. The Ripsaw has never thrown a track 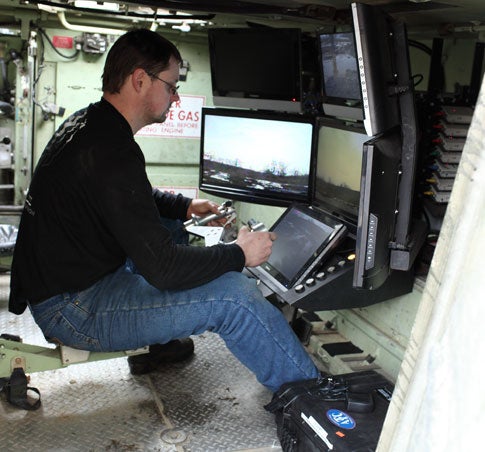 The Ripsaw’s six cameras send live, 360-degree video to a control room, where program manager Will McMaster steers the tank

When you reinvent the tank, finding ready-made parts is no easy task, and a tread light enough to spin at 60 mph and strong enough to hold together at that speed didn’t exist. So the Howes hand-shaped steel cleats and redesigned the mechanism for connecting them in a track. (Because the patent for the mechanism, one of eight on Ripsaw components, is still pending, they will reveal only that they didn’t use the typical pin-and-bushing system of connecting treads.) The two-pound cleats weigh about 90 percent less than similarly scaled tank cleats. With the combined weight savings, the Ripsaw’s 650-horsepower V8 engine cranks out nine times as much horsepower per pound as an M1A Abrams.

While working their day jobs — Mike as a financial adviser, Geoff as a foreman at a utilities plant — the self-taught engineers hauled the Ripsaw prototype from their workshop in Maine to the 2005 Washington Auto Show, where they showed it to army officials interested in developing weaponized unmanned ground vehicles (UGVs). That led to a demonstration for Maine Senator Susan Collins, who helped the Howes secure $1.25 million from the Department of Defense.

The brothers founded Howe and Howe Technologies in 2006 and set to work upgrading various Ripsaw systems, including a differential drive train that automatically doles out the right amount of power to each track for turns. The following year they handed it over to the Army’s Armament Research Development and Engineering Center (ARDEC), which paired it with a remote-control M240 machine gun and put the entire system through months of strenuous tests. “What really set it apart from other UGVs was its speed,” says Bhavanjot Singh, the ARDEC project manager overseeing the Ripsaw’s development. Other UGVs top out at around 20 mph, but the Ripsaw can keep up with a pack of Humvees. 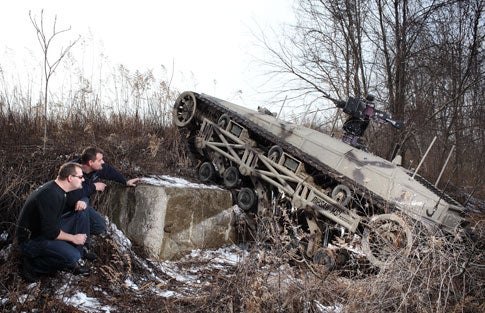 Despite the best efforts of inventors Mike [left] and Geoff Howe, the Ripsaw has proven unbreakable. It did once break a suspension mount — and drove on for hours without trouble

Back on the field, the tank has been readied for the photo. The program manager for Howe and Howe Technologies, Will McMaster, who is sitting at the Ripsaw’s controls around the corner and roughly a football field away, drives it straight over a three-foot-tall concrete wall. The brothers think that when the $760,000 Ripsaw is ready for mass production this summer, feats like this will give them a lead over other companies vying for a military UGV contract. “Every other UGV is small and uses [artificial intelligence] to avoid obstacles,” Mike says. “The Ripsaw doesn’t have to avoid obstacles; it drives over them.” 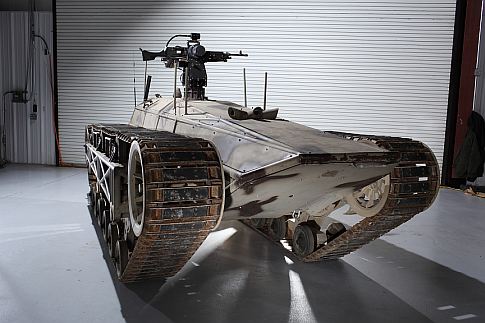 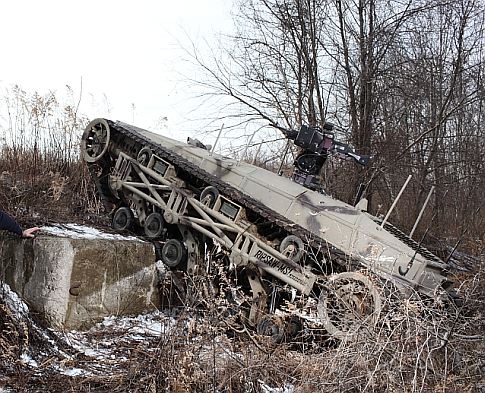 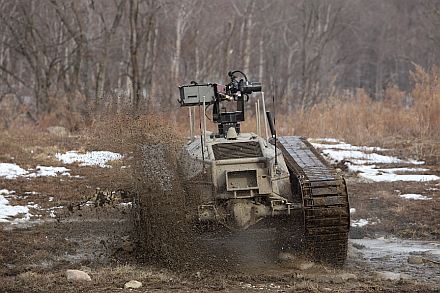 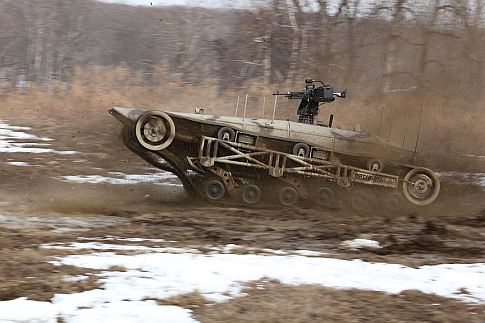 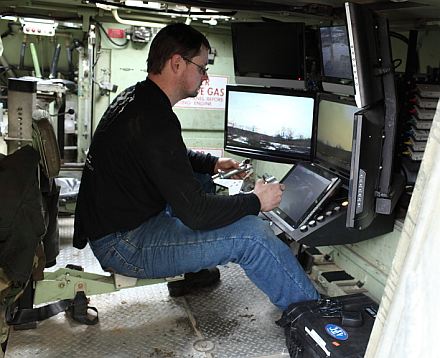 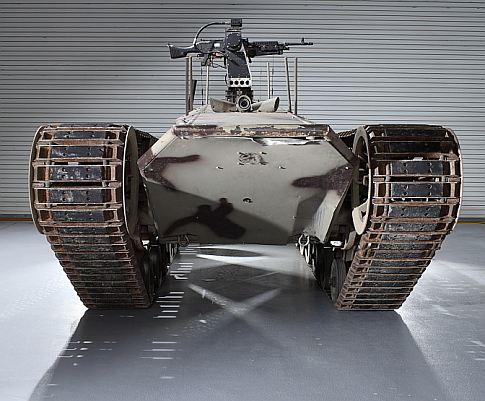