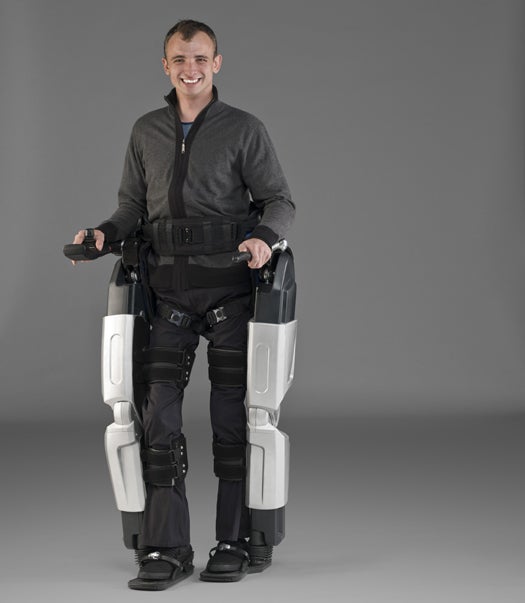 We’ve seen robotic exoskeletons before — there’s Lockheed’s HULC that’s designed to augment soldier performance, and then there’s Raytheon’s XOS that’s more like an actual Iron Man suit — but this one is different. REX, the Robotic Exoskeleton, is designed to help those usually bound to wheelchairs stand up and walk, and it should be commercially available later this year.

Created by two New Zealanders whose mothers are confined to wheelchairs, REX allow users to self-transfer from chair to the exoskeleton, then control their movements via a joystick and control pad. It runs on a rechargeable battery that lasts about two hours during continuous use and is swappable in instances where the user wishes to move about on his or her feet for longer periods.

At $150,000 USD, REX is by no means inexpensive, but it does offer wheelchair users a practical and (almost) readily available means of getting out of their chairs. Other technology like HULC (which isn’t intended for paraplegics anyhow, but rather to enhance strength and performance) are still in testing and could be for awhile. REX will go on sale in Auckland later this year and should be available worldwide by mid-2011.