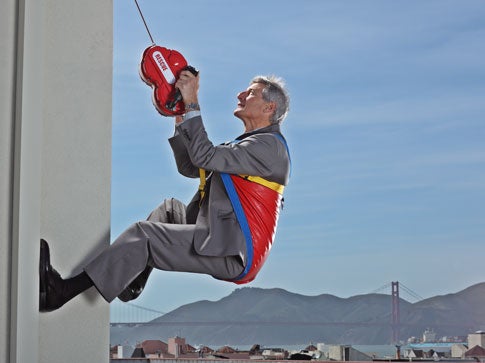 Stone found all the existing systems for rescuing people from high places to be flawed or impractical, so he designed a device based on a fishing reel, a simple harness that would lower people steadily from skyscraper heights on a secure length of cord. The Rescue Reel affords people an easy way to engineer their own escape: All users have to do is open a file-drawer-size container and hook a Kevlar cord to a secure object or connection point (such as between a door and its frame). Then they step directly into the one-size-fits-all harness and rappel through an open window up to 100 stories from the ground. No special training is needed, and the entire sequence could take less than a minute.

Stone’s major innovation is a centrifugal braking system that automatically controls the rate of descent. The Rescue Reel’s cord unwinds from a spool and wraps around a shaft connected to a brake. As the shaft spins, a set of brake pads exerts force on the inner edge of the brake housing, smoothly slowing the user down. Should the automatic brake fail, the device is also equipped with a manual backup brake lever. Descending from 100 stories up takes less than four minutes—about two seconds per story. 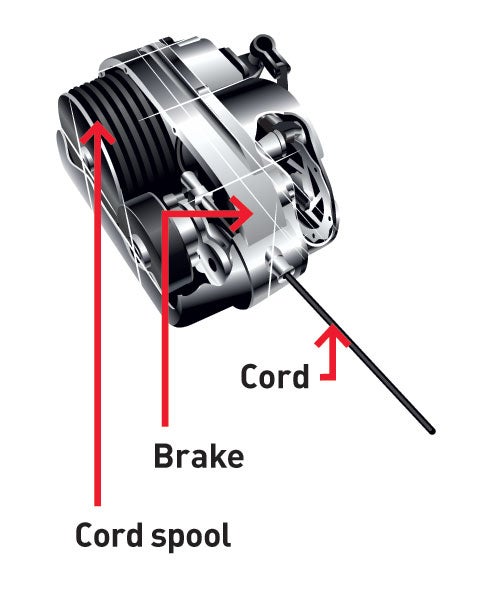 Rescue Reel: How It Works

As the cord unwinds, a self-adjusting braking system ensures that the wearer descends at a constant rate

Stone tested a prototype in 2007, and Skala, a company specializing in rope-access systems, has since conducted extensive tests of the device at California’s Vallejo Fire Department. It’s a significant upgrade from the slow, cumbersome rope systems firefighters usually use for high-floor rescues, says fire-safety consultant Scott Douglass. “It’s a lot more automated, and it’s easier and more intuitive for the trapped person to use.” He thinks it could be used for cliff rescues as well.

Now that testing is complete, Stone is preparing to market the Rescue Reel. A commercial-ready version should be available next year for about $1,500. He foresees lowering the price considerably once he starts mass production, making it practical for building owners who want to give their tenants an escape clause.