Nature unleashes a torrent of energy as ash fills the air 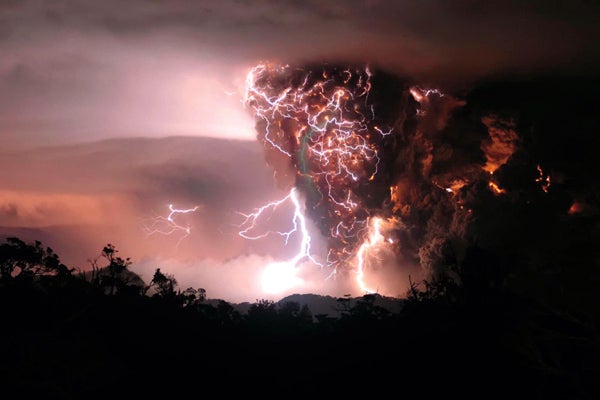 lying dormant for more than 9,000 years, the Chaitén volcano belched forth a 40,000-foot-tall ash plume in early May, touching off lightning and a monthlong eruption. The volcano, situated 700 miles south of Santiago, Chile, forced the evacuation of 8,000 people from the nearby village of Chaitén. It was roughly comparable in size to the 1980 Mount St. Helens eruption that released hundreds of millions of tons of debris in an explosion 1,000 times as powerful as the atomic bomb that was dropped on Nagasaki.

Scientists suspect that volcanic lightning results from particles in the ash cloud rubbing together as the plume swirls. They aren’t sure about which types of particles generate the most static electricity, nor do they know how much energy is produced during the event. Of course, the lack of research done in the field is understandable: Even scientists, when they see an erupting, lightning-spewing volcano, tend to run in the opposite direction.