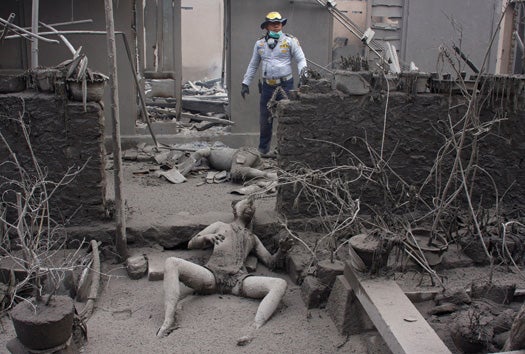 Volcanic eruptions aren’t just violent; they’re incredibly fast, often leaving people no time to flee. Here, a rescue worker walks among the dead in the white-gray ash of Argomulyo, a village in Indonesia. This eruption last November of Mt. Merapi, one of the most active volcanoes in the world, triggered a series of fast-moving pyroclastic flows, a combination of volcanic rock and gas that can reach temperatures of 1,000 degrees. This material barreled down Merapi’s slopes at speeds of up to 100 miles an hour.

John Pallister, chief of the U.S. Geological Survey–Office of Foreign Disaster Assistance’s Volcano Disaster Assistance Program, worked with the Indonesian volcano-alert agency and credits the country’s sophisticated monitoring system and prompt evacuation with keeping the death toll below 350. Otherwise, in such a densely populated place it might have surpassed 30,000. Despite the grisly aftermath, he says, “I think the story here is one of remarkable success and just people doing their jobs right and lives being saved.”