The Beetle as Muse 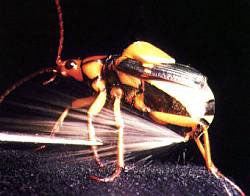 The bombardier beetle spits out a dangerous jet of venom to ward off predators, and scientists are now figuring out how it expels the toxic stuff.

According to an article in April’s issue of Physics World, the beetle’s abdomen essentially harbors a small chemical lab and combustion chamber. The gases react inside the confined chamber, eventually cranking up the heat and pressure to a point at which a valve is forced upon, and the toxic jet spurts out.

Researchers from Leeds University have replicated the process in the lab, and a company called Biomimetics 3000 plans to explore the possibility of applying the findings to medical technology, plus inhalers, fire extinguishers and even car fuel-injection systems. Who knows, soon when you step on the gas, you might have a beetle to thank.