How About Some Yak Cheese With That Turkey Sandwich?

A study identifies potential health benefits of the Himalayan treat 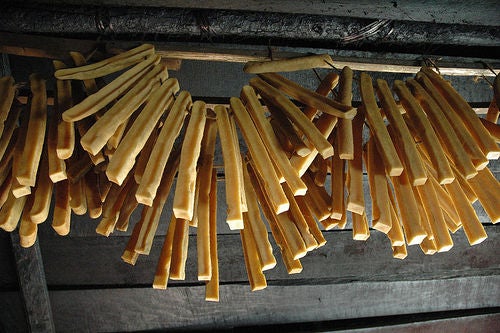 Move over cheddar. It’s time for something hairier…er, healthier. Researchers in Nepal and Canada are reporting [PDF] that yak cheese has higher levels of several healthy fatty acids than the stuff derived from dairy cattle.

Nepal was the first country in the world to start making cheese from Yak milk, and it has been used extensively in Himalayan cuisine. It has only recently become available in the U.S. at certain gourmet grocery stores, and its availability for order online is limited, although export programs for local Himalayan cheese makers are growing.

In the study, the researchers found that, relative to cheddar, it has much higher levels of conjugated linoleic acids, which they say could help fight heart disease, cancer, diabetes and even slow the development of atherosclerosis. The cheese also has more heart-healthy polyunsaturated fatty acids.

The cheeses studied in the research were made from yak reared in the highlands of the Nepalese Himalayas. The diet of the animals may be a factor. Before you run out to hunt down some yak cheese, though, the scientists do conclude that more work should be done to consider its overall effects on human health. And let’s not forget its taste.