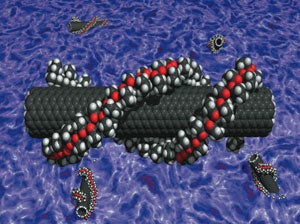 If inhaled, certain kinds of carbon nanotubes – the tiny technology used in a wide variety of applications – could increase an individual’s risk of cancer, according to scientists. Researchers injected mice with nanotubes, and found that the super-strong fibers created the same sort of problems as asbestos.

Currently, nanotubes are used in common products such as bike parts and computer displays. But the potential applications are wide-ranging, and this is hardly the end of the technology. Scientists have suspected for a while that nanotubes could have these effects, and experts say the new finding isn’t exactly cause for alarm. There appears to be little risk to consumers, and one nanotech business representative pointed out to the LA Times that many factories already have guidelines in place to present overexposure. For example, workers are usually required to wear respirators. Studies like this one will, hopefully, only strengthen those regulations – maybe that “usually” will become an “always”.

The work is published in the most recent issue of Nature Nanotechnology.