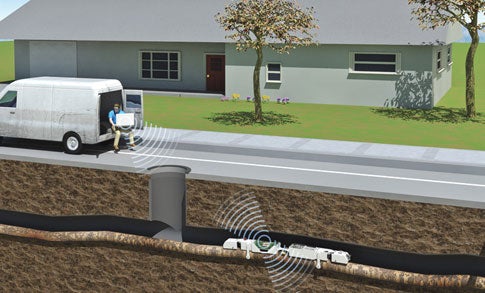 Hands Off As the robot chugs along the cable, it sends a Wi-Fi report of what it finds to the operator.

Burying power cables underground has uncluttered the streets and kept lights on through storms, but water seepage, natural disasters, and general wear and tear can still cut power. As a result, a large utility company typically employs 4,000 workers and spends up to $200 million annually to monitor and maintain tens of thousands of miles of subterranean cables.
Soon, instead of sending a crew to put a cable through high-voltage stress tests every time there’s a mishap, companies could deploy a robot to pinpoint the problem. Researchers at the University of Washington have invented the Robotic Cable Inspection System, or Cruiser, a four-foot-long, train-like ‘bot that crawls along power cables buried in utility tunnels, sniffing out trouble spots along the way.

Cruiser coasts along on hourglass-shaped wheels, and adjustable stabilizer arms keep it upright. The segmented design snakes around curves and allows for modular expansion of the robot, making it possible to add extra sensors or battery packs without a major overhaul. Human operators can upload a basic mission plan, which the robot’s circuit-board brain fine-tunes as it encounters damaged cable.

Last December, Cruiser aced its first field test, inspecting segments of cable for post-hurricane water damage in New Orleans. Several large utility companies have already expressed interest in the robot, and a commercial version could roll out as soon as 2012.