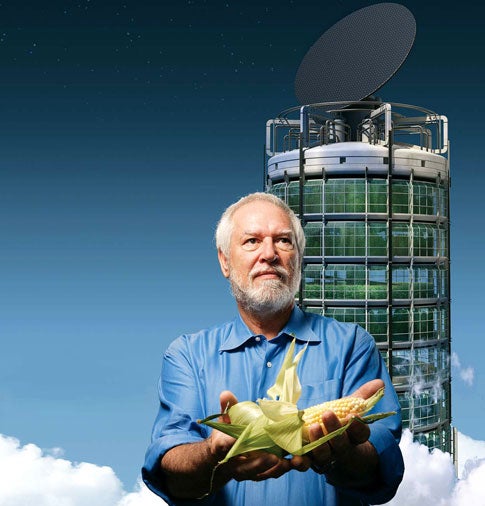 CORN ON THE JOB Dickson Despommier plans to grow crops inside city buildings.

Al Gore urges everyone to plant trees in An Inconvenient Truth. But where, asks Dickson Despommier, a 67-year-old microbiologist at Columbia University, can we plant them if, as scientists suggest, more and more of the world’s forests will soon become farmland to support our explosive population growth? Nearly 41 percent of Earth’s land is now used for agriculture, yet we’re on the brink of vast population growth, from 6.7 billion people today to an estimated 9.2 billion by 2050, with the majority living in cities. The only way to make room for enough carbon-sequestering trees to reverse global warming, Despommier argues, is to change the way we farm. Radically. Despommier envisions blocks of vertical farms in the world’s biggest cities, each structure 30 stories high, providing enough food and water for 50,000 people a year, with no waste. He is in discussions with potential investors to build the first prototype. Despommier also sits on the board of New York Sun Works, an eco-friendly engineering firm in Manhattan that in May demonstrated a similar–if much smaller–urban-farm concept on a floating barge.

Q: How did you come to the idea of putting a farm in a skyscraper?

A: About eight years ago, I asked my students to come up with ideas on urban sustainability, and they proposed 13 acres of farmable land on the commercial rooftops of Manhattan. We figured out that it would feed just 2 percent of the city, so I said, “Let’s take the 1,723 abandoned buildings in Manhattan, retrofit them and do hydroponics.” Then I said, “OK, forget about money, space and time, and design a building that will feed and hydrate 50,000 people a year.” I wanted individuals to eat 2,000 calories a day and drink water created by evapotranspiration.

Q: Meaning water
from plants?
A: Right. The condensation comes from the leaves, even though you put the water into the roots. If you had a vertical farm the size of a city block, the plants inside could produce enough water for roughly 50,000 people.

Q: Where would irrigation come from?
A: The sewage. First you’d desludge it. Then you’d filter it through nonedible barrier plants and again through a tower of zebra mussels, the best filtering organism out there. After that, the water would be pristine.

Q: How many different kinds of fruits and vegetables would you grow inside the building?
A: More than 100–strawberries, blueberries, even miniature banana plants. We got a list from NASA of produce that can be grown indoors. It turns out that NASA has a big hydroponics program, because there’s no takeout on Mars–you can’t send out for a pizza. Genetic engineering and artificial selection will also play an important role in vertical farming because there are
a lot of plants, such as traditional corn, that we don’t yet know how
to grow indoors.

Q: How will this fight global warming?
A: All the governmental reports say the same thing: The biggest polluter is agriculture. I love the look of a wheat field, but it’s a huge trade-off to grow food outside the city–40.5 percent of the earth is used for agriculture. As the population grows, the demand for food goes up and more land is cleared for farming. Come up with an alternative to traditional agriculture, and you already have the strategy for sequestering carbon dioxide: planting trees.

Q: How much will all this cost?
A: The first vertical farm could run into the billions of dollars. I envision state-of-the-art stuff: The plants will be placed in automated conveyer belts that move past stationary grow lights and automated nutrient-delivery systems. The first buildings would have to be subsidized, with energy incentives and tax incentives. We’re talking about the equivalent of engineering a Saturn rocket.

Q: When could we see the first farm?
A: With funding, there could be a prototype in 5 to 10 years. I hope I live to be 106 and see the skyline dotted with them.