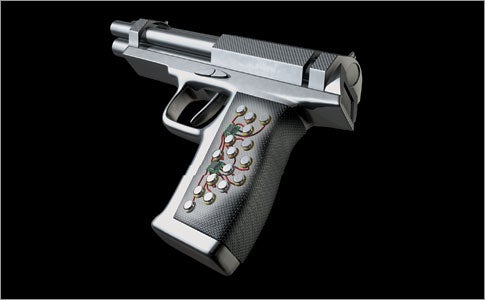 Armed with $2 million in federal grants, researchers at the New Jersey Institute of Technology (NJIT) are close to perfecting the first commercially viable “smart gun.” The prototype pistol, unveiled last month, is designed to recognize specific people’s grips. When seized by an unauthorized hand-say, that of a child or a criminal-the gun locks its shooting mechanism.

The gun relies on Dynamic Grip Recognition, a biometric technology embedded in its handle. Sensors and microprocessors analyze the complex interplay of bones and muscles involved in pulling the trigger, all in a fraction of a second. “The way you hold a gun, curl your fingers, contract your hand muscles as you pull the trigger-all of those measurements are unique,” says Donald Sebastian, vice president for research and development at NJIT.

Gun-safety advocates hail the device as a way to significantly reduce the estimated 29,000 firearm deaths in the U.S. each year, although some gun-rights advocates worry that the technology could prove more error-prone than traditional guns. Sebastian says the NJIT prototype currently has a failure rate of 1 in 100 trigger pulls, but his team aims to improve that rate to 1 in 10,000-the Pentagon’s standard for military weapons-by increasing the number of grip sensors from 32 to “hundreds” and further refining the pattern-recognition software. If all goes well, Sebastian expects a commercial version by 2008.

Users will probably Program the NJIT gun at a local police station’s firing range. During the registration process, the owner will test-fire the weapon
10 times. Each trigger pull will activate the pressure sensors embedded in
the gun’s handle. Microprocessors will analyze the data and create a permanent profile of the user’s grip.