Rust can hold an airplane together or dissolve it to bits 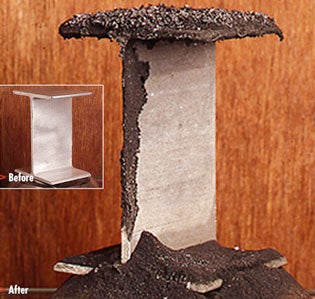 Unless you are a representative of a national meteorological bureau licensed to carry a barometer (and odds are you’re not), bringing mercury onboard an airplane is strictly forbidden. Why? If it got loose, it could rust the plane to pieces before it had a chance to land. You see, airplanes are made of aluminum, and aluminum is highly unstable.

Wait, isn’t one of the great things about aluminum that, unlike iron, it doesn’t rust? Am I talking about the same aluminum? Yes! Your aluminum pot is made of a highly reactive chemical. It simply has a trick that lets it disguise itself as a corrosion-resistant metal.

When iron rusts, it forms iron oxide–a reddish, powdery substance that quickly flakes off to expose fresh metal, which immediately begins to rust, and so on until your muffler falls off.

But when aluminum rusts, it forms aluminum oxide, an entirely different animal. In crystal form, aluminum oxide is called corundum, sapphire or ruby (depending on the color), and it is among the hardest substances known. If you wanted to design a strong, scratchproof coating to put on a metal, few things other than diamond would be better than aluminum oxide.

By rusting, aluminum is forming a protective coating that’s chemically identical to sapphire–transparent, impervious to air and many chemicals, and able to protect the surface from further rusting: As soon as a microscopically thin layer has formed, the rusting stops. (“Anodized” aluminum has been treated with acid and electricity to force it to grow an extra-thick layer of rust, because the more you have on the surface, the stronger and more scratch-resistant it is.)

This invisible barrier forms so quickly that aluminum seems, even in molten form, to be an inert metal. But this illusion can be shattered with aluminum’s archenemy, mercury.

Applied to aluminum’s surface, mercury will infiltrate the metal and disrupt its protective coating, allowing it to “rust” (in the more destructive sense) continuously by preventing a new layer of oxide from forming. The aluminum I-beam above rusted half away in a few hours, something that would have taken an iron beam years.

I’ve heard that during World War II, commandos were sent deep into German territory to smear mercury paste on aircraft to make them inexplicably fall apart. Whether the story is true or not, the sabotage would have worked. The few-micron-thick layer of aluminum oxide is the only thing holding an airplane together. Think about that the next time you’re flying. Or maybe it’s better if you don’t.