We race the two sims through the Rockiesâ€”which wins? 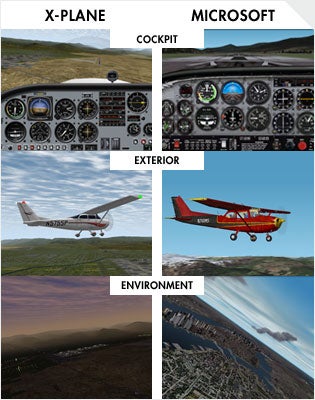 On Friday, June 6, Popular Science assistant editor Gregory Mone and I took off in Cessna 172s from Aspen, Colorado, on what should have been easy 20-minute flights to Leadville Airport, 25 miles to the East.

Neither of us made it.

Perhaps it was hubris–when you’re flying over the Rockies, you’d better respect the mountains and know full well what you’re getting into.

Unfortunately, neither of us did.

Fortunately, that’s exactly what we were flying. I had Microsoft’s Flight Simulator 2002 on a PC laptop, and Mone flew X-Plane aboard an Apple PowerBook. The two sims are each other’s only competitors, and their respective fan bases are fiercely loyal. Microsoft’s is the commercial favorite, but X-Plane is quickly earning credibility and respect for its highly accurate flight model (see “Austin & Goliath,” Popular Science, August 2003). We flew the two competing flight simulators head to head in identical scenarios to see which reigned supreme, at least in our minds.

We both flew Cessna 172s because those are two airplanes both sims have in common. I chose a flight through the Rockies to better showcase the scenery. What I neglected to factor in was the challenge of flying at such high altitudes–upwards of 7,000 feet in each case. Leadville is the third-highest airport in the world, and Aspen isn’t exactly sea level. Because of the highly accurate flight models in both programs, the airplanes’ performance suffered at high altitude, due to the thin air. They took longer to climb higher–making the surrounding mountains formidable hurdles.

After I gave Mone an introduction to the flight controls and the instrumentation, we parked ourselves at the ends of our respective runways. They actually were the same runways–just rendered differently in each program.

Microsoft’s version had a realistic small-airport control tower and a few hangars. Pine trees peppered the landscape and mountains loomed in the distance. X-Plane had more generic-looking structures, and no apparent trees, but the view was clearer, crisper, and more three-dimensional. Additionally, the tire skid marks on the X-Plane runway were more realistic-looking–they were streaky, not blotchy like Flight Simulator’s rendition. The mountains in the distance were identical to those in Flight Simulator–likely a sign that both programs have their geographic modeling spot-on. Microsoft’s Cessna 172 cockpit was slightly different than X-Plane’s–a few more gauges, a slightly crisper image.

We took off from Aspen and banked off to the East, heading straight for a mountain range. As we both pulled back on the elevator controls to keep the airplanes heading up, we started losing speed, quickly closing in on dangerous stalls. I barely cleared the ridge. The airplane didn’t want to climb, and I knew that the next incline, just ahead, would be trouble.

Mone was having a harder time–he never made it over the top. Instead, he snaked along the side of the ridge for a while before giving up and pulling a hard right to head back into the valley below.

Realizing my poor judgment in devising this particular scenario, I decided to cut our losses. I put my Cessna down in the trees, ejected Mone out of his flight, and arranged for us both to move up to some military hot rods. Mone got into a Lockheed Martin F-22 Raptor and I climbed into its counterpart, Northrop Grumman’s YF-23, the aircraft that was in competition with the F-22 in the military’s selection process nearly a decade ago. We took off and shot over the ridge like a couple of cannonballs.

We had great fun cruising over the Rockies, enjoying the scenery, and trying to find our destination airport. After about 15 miles, I spotted the lake that sits near Leadville–both programs rendered it exactly where real-world maps said it would be. I cut my power, dropped into the valley, and headed for the little airstrip. Again, this was poor planning–I realized that the little strip would be far to short for the kinds of rollouts we both would need. Without enough time to divert to Denver International, we decided to take a crack at it.

Mone, however, was becoming overwhelmed by the squirrely controls of the F-22. It’s a sensitive aircraft, and as he tried to line up on the runway, disaster struck–he lost control and went down near the lake–luckily he’s a good swimmer. I was only marginally more successful in Flight Simulator. I throttled too far back, came in under-powered, and crashed into the trees about a quarter-mile short of the runway, which I would have rolled right off of anyway, had I made it.

Both simulators did a fantastic job, with the edge for overall visual quality going to X-Plane, but the detail and scenery realism award going to Flight Simulator. As for the flight models, both were accurate enough to convince us not to give up our day jobs.