Organization Man with a Business Plan 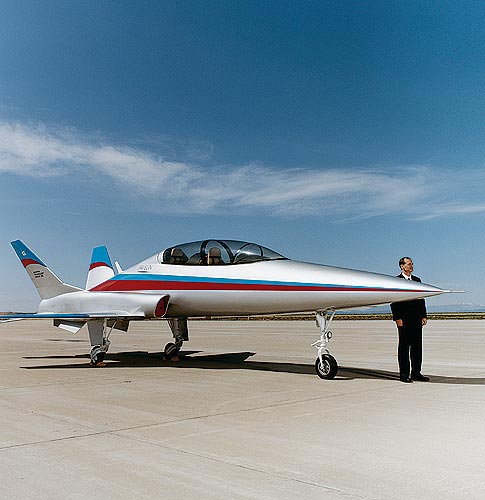 George Bye is sure there’s a market for his flying sportscar, the Javelin. It will cruise just below supersonic speeds, carrying a pilot, a passenger, and 200 pounds’ worth of luggage and golf clubs.

Imagine your own personal fighter jet, a sleek speed demon with the hindquarters of an F-18, the nose of a T-38, and your name stenciled on the side. Would you pay a $2.5-million price tag–assuming you could? That’s the big question behind the Javelin, a recreational light jet dreamed up by former U.S. Air Force pilot George Bye, who is 47. “I had a eureka moment,” Bye says. “My wife was making dinner, and I had the idea and wrote it on a napkin. When I told her about it, she said, â€That’s nice, dear. It’s time to eat.’ “

By mating modern lightweight avionics with new-generation ultralight turbine engines, Bye hopes to create a “sportscar for general aviation” capable of speeds up to Mach 0.92, just shy of supersonic. In 2000 he put together a company, Aviation Technology Group, to design, build, and market the Javelin. But few aircraft start-ups manage to endure the Federal Aviation Administration’s lengthy, expensive testing and certification process for production aircraft. If the Javelin does, its most serious competition will come from the many military surplus jets on the market (you can pick up a reconditioned Czech L-39 Albatross for about $500,000). But military jets are expensive to maintain and are subject to extensive restrictions. They can’t, for instance, be used commercially or to carry passengers.

ATG hopes to have the first Javelin–powered by two 1,700-pound-thrust turbofans and using state-of-the-art digital avionics–airborne early this year and to win FAA certification by 2007. But even if it does, will enough customers cough up $2.5 million for an over-the-top toy? Bye hopes to capture just 8 percent of the very-light-jet market, which will amount to 430 airplanes in the next 10 years.

Forecast: Partly Sunny
Aeronautically, there’s no reason the Javelin shouldn’t make for a practical, even thrilling aircraft. “It will probably fly nicely,” says Jack Cox, editor of Sportsman Pilot magazine, adding, “Just because of the price alone, this is going to be a small market. If they think they can sell 400, I wish them luck.”