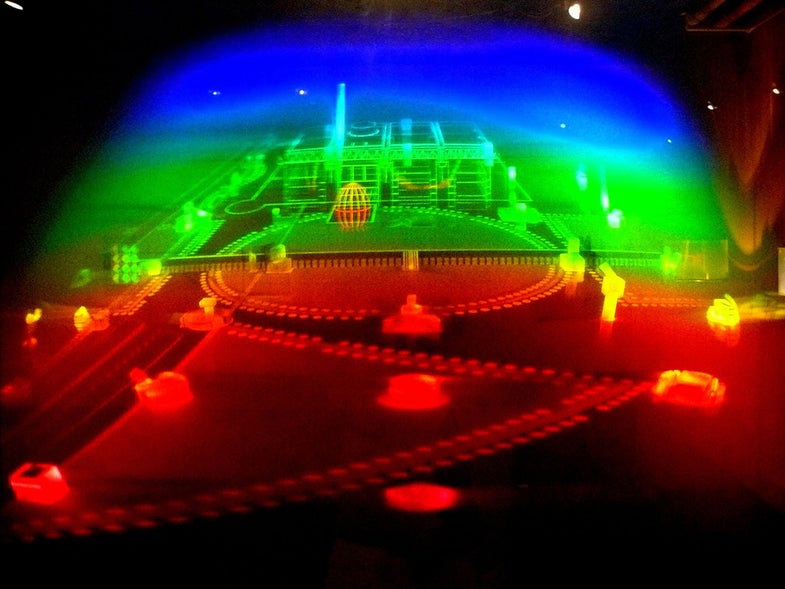 Today, General Electric unveiled a next-generation optical storage technology that can pack as much as 20 Blu-Ray discs or a hundred DVDs’ worth of data onto a single disc. The newly devised discs, which use holograms to store data in the form of bits, can hold 500 gigabytes of information, the company says.

Researchers achieved this data density by embedding microscopic holographic patterns in light-sensitive plastic. When the disc is later “read” (hit with a laser beam to retrieve the data for subsequent deciphering), these plastic micro-holograms act like tiny mirrors that reflect the signal, says Brian Lawrence, project leader for GE’s Holographic Data Storage Program.

Current discs work in a similar manner, but they encode data in pits etched into a one-micron-thin layer of metal such as aluminum. But CDs, DVDs, and Blu-Ray discs just scratch the surface of data storage, literally and figuratively. “In these previous three generations, plastic acts as an inert carrier for the data that sits in a thin layer of metal, while in our method the plastic becomes the storage medium itself,” says Lawrence.

The products that GE plans to sell based on the technology — starting in 2012 — will work in devices similar to current disc readers, allowing buyers to still access and play their old albums, movies, and other media. Crucially, at least from a cost perspective, GE says the new discs will also be manufactured using the same molded plastic technique that’s currently used for making discs.

GE plans to target the commercial archiving sector first, including medical and financial institutions that keep records around for decades. Today, most archival data is kept on old-school magnetic tape, like that found in the cassettes that fill bins at used record stores. Magnetic tape has a lifetime of only about 20 years, says Lawrence. “Companies nowadays have to have a ‘refresh’ strategy — before the 20 years is up, they have to copy their data to another medium,” he says. CDs, DVDs, and Blu-ray discs similarly break down in about a decade, as their metal data-storing layer corrodes, making them unreadable. Comparatively, Lawrence expects the new holo-discs to safely store info for 50 to 100 years, in part because plastic does not degrade much (just ask environmentalists).

As for the consumer market, the possibility of squeezing 100 movies (with bonus features) onto a single disc could free up some of the shelf space that the movie or CD library used to occupy — and you could take it all on the go. The discs could also appeal to individuals who rack up reams of digital data, from Facebook-ready pics to personal video and audio recordings.