The Science and Technology Behind “The Sum of All Fears”

To maintain accuracy and realism, producers of the film sought out military and government officials to advise them.

Since the collapse of the Soviet Union, the world landscape of trust and stability has dramatically changed. Instead of a Cold War or threat of confrontation between two superpowers, countries around the world have had to brace for the possibility of deadly attacks from terrorists that could result in a scenario, such as the World Trade Center tragedy. Renowned author Tom Clancy visits such an attack in his New York Times bestseller The Sum of All Fears. He is executive producer on the May 31 release of the film from Paramount Pictures, starring Academy Award-winner Ben Affleck and three-time Academy Award nominee Morgan Freeman. Interestingly, the book was published in 1991 before any such attack, as that on the World Trade Center, was thought possible. Eerily prescient in the current political climate, the movie depicts a terrorist attack on U.S. soil with the use of a weapon of mass destruction. How likely is this? Could elements needed for such an attack get smuggled into the U.S. undetected, or could these components already be here and available to enemy cells?

Because accuracy and realism were vital to the telling of The Sum of All Fears, the producers sought out military and government officials to advise them on the film. Among those most helpful to the production was Air Force liaison Chief Charles E. Davis, the Department of Defense project officer assigned to the film.

“We were delighted when asked by the production company to provide assistance,” says Davis. “We worked closely with the producers and director to identify their needs and then offer our recommendations on how those needs could best be met.”

Though national security has heightened over the last year, the U.S. is an open and economically efficient society where many goods, services and people come in to the United States every hour. Says Chase Brandon, 30-year veteran at the CIA and technical advisor to the movie, “While security procedures at U.S. points of entry have steadily increased, the simple underlying fact is we are a nation that demands convenience, and for every new procedure we put into place it is still easy to move things in, whether in big boxes, little boxes, people, or containers.”

According to the CIA, at least 20 countries already have or may be developing weapons of mass destruction. Since the Cold War ended, it has been determined that at least 164 transportable devices are missing from the ex-Soviet Union’s stockpile of explosives. It would only take one of those to have devastating results. This lack of accountability might allow for the next, and most severe, attack imaginable. “Getting portable and other explosive devices into the U.S. undetected is certainly not impossible. Extraordinary acts of terrorism are always a threat. The rules have changed from when we didn’t think this could happen to now we expect it to happen. If these devices exist they can be obtained and used. We need to take advanced steps to diffuse the situation before it happens,” says Brandon.

To guarantee authenticity with regard to political matters and the method of such a potential attack, the filmmakers on The Sum of All Fears consulted extensively with Brandon and the Department of Defense. According to Davis, “This is probably one of the most technically correct movies in a long time.” The Department of Defense made it possible to film numerous aircraft, including a group of F-16s and B-2s, as well as U.S. Army Blackhawk helicopters. The film also benefited from the extensive access to the Pentagon, the CIA, the White House and the National Airborne Command Center.

Under supervision, the art crew was permitted to take photographs, make sketches and take notes that proved invaluable in recreating the physical details of the sets built and dressed on stage. This level of collaboration allowed the filmmakers an environment of accuracy and realism. Great attention was paid to detail from set construction to character development. Affleck spent time at CIA Headquarters in preparing for his role as a CIA analyst.

“Having such support from the government and military added verisimilitude that could not otherwise have been achieved onscreen,” says producer Mace Neufeld. “There is no substitute for the real thing.”

“The initial request for assistance came from the senior production team,” explains Brandon. “They wanted the director, the producers, some of the set decorators and costuming people to come and see CIA headquarters, to basically have a chance to see the terrain and what we look like, in order to make a realistic movie.”

Al Di Sarro was the expert special effects coordinator on The Sum of All Fears. Di Sarro and his special effects crew created explosive pyrotechnics, rain, snow, flames, wind, smoke and ash. They were also responsible for the mechanics in the film, including the “controlled” crash of a Huey helicopter, and the design and construction of a 120-foot gimbaled platform, which rocked and tipped the National Airborne Command Center set in order to simulate aircraft turbulence. Neufeld and his visual effects team used everything from sophisticated computer-generated animation to the more traditional method of green-screen compositing.

One of the film’s most multifaceted sequences, the Super Bowl, was shot in Montreal’s Olympic Stadium, which for three days was transformed into the Baltimore Forum.

“The Super Bowl is a massive event. To recreate it, with all of the panoply is quite an undertaking,” says executive producer Stratton Leopold. Paramount Pictures consulted with experts from the Air Force, the Marines, the Army and the Navy. In fact, the myriad of top-notch experts provided technical advice on everything from what would occur during and after a nuclear explosion, to the procedures involved in the building and handling of nuclear weapons.

“We live in dangerous times, says Neufeld. “The number of nuclear devices floating around the world is of very legitimate concern. The possibility of a clandestine terrorist attack gets stronger all the time, as reflected in newspaper headlines, which, on a daily basis, seem to get closer to our story. Hopefully, they won’t catch up.”

“When I read the script, I was struck by how smart it was, which is a touchstone of all the Tom Clancy movies,” says The Sum of All Fears director Phil Alden Robinson. “They’re smart action films. They’re about the issue of the real world, treated in an intelligent manner. In the post Cold War world, with regional conflicts becoming more prevalent and the proliferation of technology and information, the threat of someone using weapons of mass destruction – nuclear, chemical or biological – in a populated area, has increased tremendously. This is a film that shows the danger of how fear can drive our reactions and lead us to the wrong conclusions and responses.”

The Sum of All Fears is a chillingly realistic portrait of what could happen if one such weapon fell into the wrong hands. The film is a frightening depiction of how quickly fear can escalate into a paranoia that dominates man’s ability to reason. 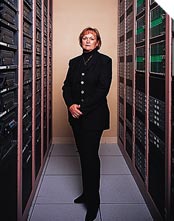 SHE WILL BE WATCHING YOU
Pat Fischer, the Bellagio’s surveillance director, flanked by banks of VCRs (left) and computers (right).