For The First Time, A Laser That Shines Pure White

A full spectrum of exciting potential 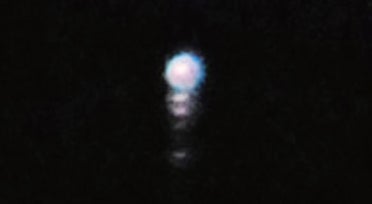 The laser is a versatile tool in the modern technological arsenal. It can provide immense energy to a precise location at a very specific wavelength, but it’s always fallen short in one regard: lasers emit light at a single specific wavelength. Until now.

A team from Arizona State University has built a white laser that simultaneously fires in red, green and blue, covering more than 90 percent of the colors perceptible to the human eye.

The laser is modulated by a synthetic nanosheet, a multi-segmented, layered material that can emit in red, green, and blue light in different proportions, based on the light applied to each segment. The wavelength spans 191 nanometers, which the study claims is the largest reported for a laser of this kind. Researchers “grew” the material, alloyed from zinc, cadmium, sulfur, and selenium, in a 4-foot tube that reached more than 1,800 degrees Fahrenheit.

So, we have a white laser. What does that mean? Well, lasers are being used more and more in transparent laser displays, even garnering interest from Apple. Being able to reproduce the color white with a laser is huge step towards making these technologies more viable.

These lasers also have immense possibility in data transfer. Wireless data transfer using light has already been demonstrated at blistering gigabit speeds using white LED lights. Lasers are already an improvement over LEDs, because Li-Fi works by reading slight modulations of light, and lasers can be far more finely tuned than LEDs. White light allows those signals to be transmitted over multiple areas of the color spectrum, which is effectively adding more pathways for data to travel. The ASU team calls their white laser “the ultimate form of such a light.”

Updated on July 30 to state that cadmium was used in growing the nanosheet, not calcium.