Spiciness isn’t a taste, and more burning facts about the mysterious sensation 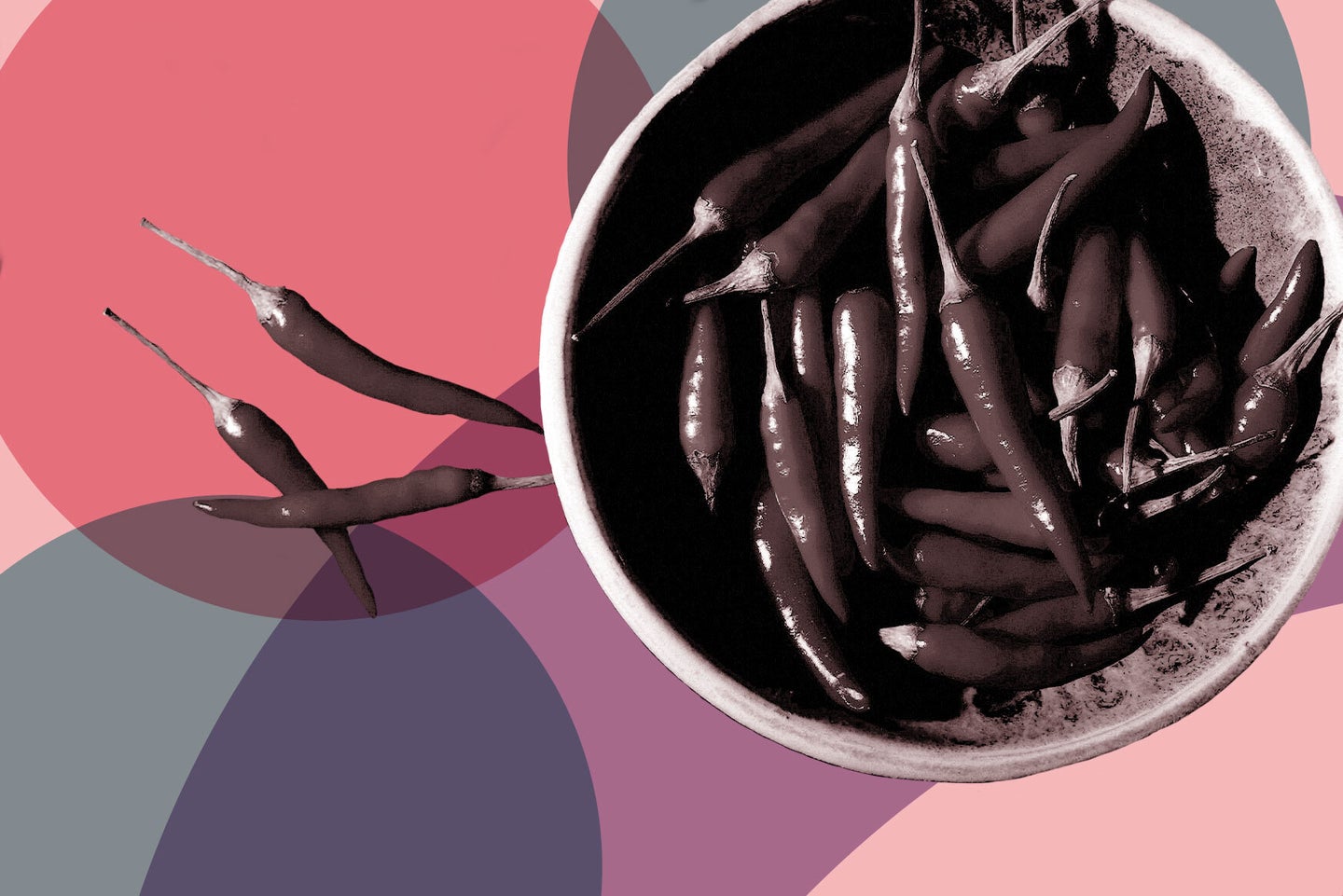 Spicy isn't a taste , but a physical reaction sensed by nerve endings, not taste buds, on the tongue. Thomas M. Evans on Unsplash
SHARE

How do you feel about those chili peppers next to menu items? Do you go for items that have three or four? Or do you avoid them?

The number of peppers next to a dish indicates a meal’s spiciness. Unlike the five basic tastes—sweet, sour, bitter, salty, and umami—spicy is something different. Spice provokes an immediate reaction, often triggering pain and numbness. In fact, humans have been using the components of spicy stuff for centuries to treat pain. Despite this, today scientists are still unraveling what spiciness actually is and what distinguishes it from taste. With a better understanding, researchers could find even better ways to use it to treat pain and other disorders.

[Related: What would possess someone to eat a Carolina Reaper pepper? This writer tried to find out.]

Spiciness often gets confused with taste. The latter comes specifically from taste buds on the tongue. Taste buds contain myriad receptors. When compounds such as sugar or glutamate hit the tongue, the corresponding receptors activate and send signals, via neurotransmitters, to the brain telling it which of the five tastes it’s savoring.

Our bodies detect spice using a completely different system than the one for taste. The trigeminal nerve, which is the part of the nervous system that sends touch, pain, and temperature feelings from your face to your brain, interprets it. In this way, spicy isn’t a taste so much as it is a reaction. Spice actually irritates the tongue and thus sends signals to the brain that the mouth is interacting with something potentially harmful, such as a toxin. The brain then responds by temporarily numbing the tongue, which is the sensation we get when we eat spicy food, as it’s a potential protection mechanism.

The molecule responsible for provoking this irritation is capsaicin, an active component in chili peppers. While it is an irritant, it doesn’t cause damage to the body the way acids or toxins can. Just because your brain responds to capsaicin as if it’s a threat doesn’t mean it’s actually harmful.

“Capsaicin is a trickster, in a way,” says Paul Rozin, a psychologist at the University of Pennsylvania. “The body is fooled into thinking it’s being attacked.”

In fact, Rozin says one possible way that capsaicin evolved in plants was as a defense against mammals. Chili peppers, wasabi, ginger, and other naturally spiced plants used capsaicin as a way to keep from getting eaten. Animals would take a bite and immediately bolt, as perhaps the shock could mean poison.

Capsaicin has actually been used as a painkiller for many centuries. Ancient peoples like the Aztecs treated lesions with chili peppers. Paradoxically, capsaicin desensitizes one to pain, but only after it’s been removed. As long as there’s a splash of hot sauce on your tongue, your mouth will experience a burning sensation. But once you remove it, your tongue starts to numb. As you repeat this process, you can withstand stronger and stronger burns because the nerve endings on your tongue that communicate with the trigeminal nerve become desensitized, inhibiting transmission of pain signals. Thus begins the process as you slowly build your tolerance for spice. On the other hand, if you find that spicy dishes you loved no longer have a kick, try taking a break from them for a couple weeks to resensitize yourself to capsaicin.

Modern science has continued research on capsaicin as a painkiller. It’s used in pain treatments, like topical creams or patches. (Please don’t try to season your food with those.) There’s also interest in injectable capsaicin for arthritis and musculoskeletal pain. This compound’s implications extend beyond neuropathic pain; it might even possess anticancer properties. There’s evidence that the molecule stimulates tumor-suppressive signaling pathways, and it could potentially work in tandem with other chemotherapeutic substances.

Though it holds medicinal properties, capsaicin is still most beloved for its kick. One captivating mystery is how humans evolved a penchant for spicy food, when our reaction to it is a danger signal. “We don’t quite know why that happens,” Rozin says. One potential theory, he says, is that Indigenous cultures that cultivated chili peppers learned to integrate it into their diets, and so they were raising children to eat spicy food from a young age. Another possibility is what Rozin calls “benign masochism,” or pleasure at doing something our brain tells us is dangerous, but we know it’s safe.

If you’re looking for a cheap thrill, some spicy food is a great place to start.