Microplastics have been piling up in many areas since the 1950s. 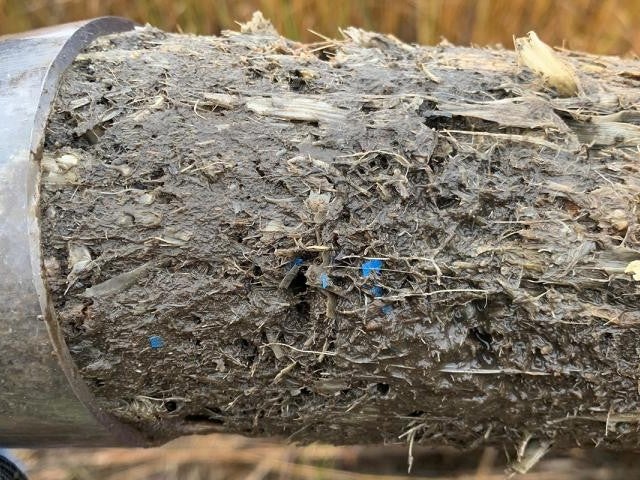 Humans have produced unfathomable quantities of plastic waste, threatening ecosystems and potentially human health. A new study in the journal Environmental Advances, aimed to figure out how microplastics were accumulating in the salt marshes of southeastern New England, vegetation-filled wetlands which punctuate the transition between land and sea.

“Scientists all over the world are finding microplastics everywhere, everywhere you look,” says Javier Lloret, a marine ecologist at the Marine Biological Laboratory in Woods Hole, Massachusetts, “whether it’s at the bottom of the ocean or the top of the highest mountains, or even if you go to remote areas like the Antarctic.”

Despite the ubiquity of microplastics, scientists are still just beginning to comprehend the impacts they may have on our ecosystems, Lloret says.

In the new study, led by Lloret and Rut Pedrosa-Pàmies, a marine biogeochemist at the Marine Biological Laboratory, the team focused on the microplastics that accumulate in a region of salt marshes. In these ecosystems, particles from the water and air tend to accrue naturally, trapped by plants and leaves into thin layers of sediment that build up over time, says Lloret. “So that made us think that potentially, in this location, there’s going to be more accumulation of microplastics than in other parts of the coast, like an open shore.” Using cores of sediment extracted from marshes in seven Massachusetts estuaries, the researchers were able to compare locations and peer back through time: They traced the relationship between the buildup of microplastics and the rate of nearby urbanization, which the researchers measured using land occupancy data.

The scientists collected these cores from a variety of salt marshes, ranging from the heavily human-impacted New Bedford harbor to salt marshes in Cape Cod that were “almost pristine,” says Pedrosa-Pàmies. The researchers sliced up the sediment layers like a tube of cookie dough and dated them back to roughly 1940, soon before plastics began hurtling into widespread everyday use. They then extracted the microplastics from those sediments and counted and classified them, distinguishing in particular between microplastic fragments—usually from larger plastic items—and microplastic fibers, which are generally from textiles or things like fishing gear. Because microplastics are so thoroughly entrenched in our surroundings, including in the atmosphere, the researchers note that they made efforts to avoid plastic contamination by wearing natural fiber clothing, checking microfiber filters for plastics in the lab and using plastic-free equipment.

As the researchers surmised, the sediments in these ecosystems did effectively trap microplastics, which have been piling up in the area since the 1950’s. They also found that the more urbanized an area was, the more microplastics were in the sediment. “But it’s not a very progressive, linear response,” says Lloret. “There seems to be a threshold at around a 50 percent level of development.” Before that threshold is hit, you’re not going to have a ton of microplastics—but after, the authors found that the amount of plastics increased exponentially.

“The other thing that was remarkable is that we saw a clear difference between the types of plastics,” meaning fibers versus fragments, says Pedrosa-Pàmies. While microplastic fragments corresponded to the level of urban development, which indicates that they may have come from more local sources, microplastic fibers appeared at relatively stable numbers even in the least human-impacted salt marshes, suggesting that their origins were more diffuse—and, says Lloret, that any mitigation efforts would likely need to happen at the state or regional level, rather than the local level.

[Read more: Microplastics are everywhere. Here’s what that means for our health.]

“Fibers are probably being produced more regionally, and transported by the wind or the tides very efficiently, so their numbers are more homogeneous,” says Lloret.

The study authors note that because of technological limitations, they did not analyze plastic particles smaller than 250 microns. They also did not identify the exact chemical composition of the particles, which Susanne Brander, an ecotoxicologist at Oregon State University who was not involved in the research, says could lead to the misidentification of non-plastic fibers as microplastic fibers.

However, the suggestion that fibers are being moved around on a global or regional scale was the most striking bit for Brander. The study “has me pondering how we can begin to reduce global contamination from fibers,” Brander wrote in an email to Popular Science. “We need to control them at the source, starting with our washers and clothes dryers, and removing them from the biosolids used in agriculture prior to application.”

This research, the authors say, is just the start of a long series of questions on the relationship between microplastics and salt marsh ecosystems.

“The potential for interactions with the animals and plants that live there is huge,” says Lloret.