How science came to rely on the humble lab rat

Almost 100 years ago Popular Science reported on the rise of rat use in lab experiments. 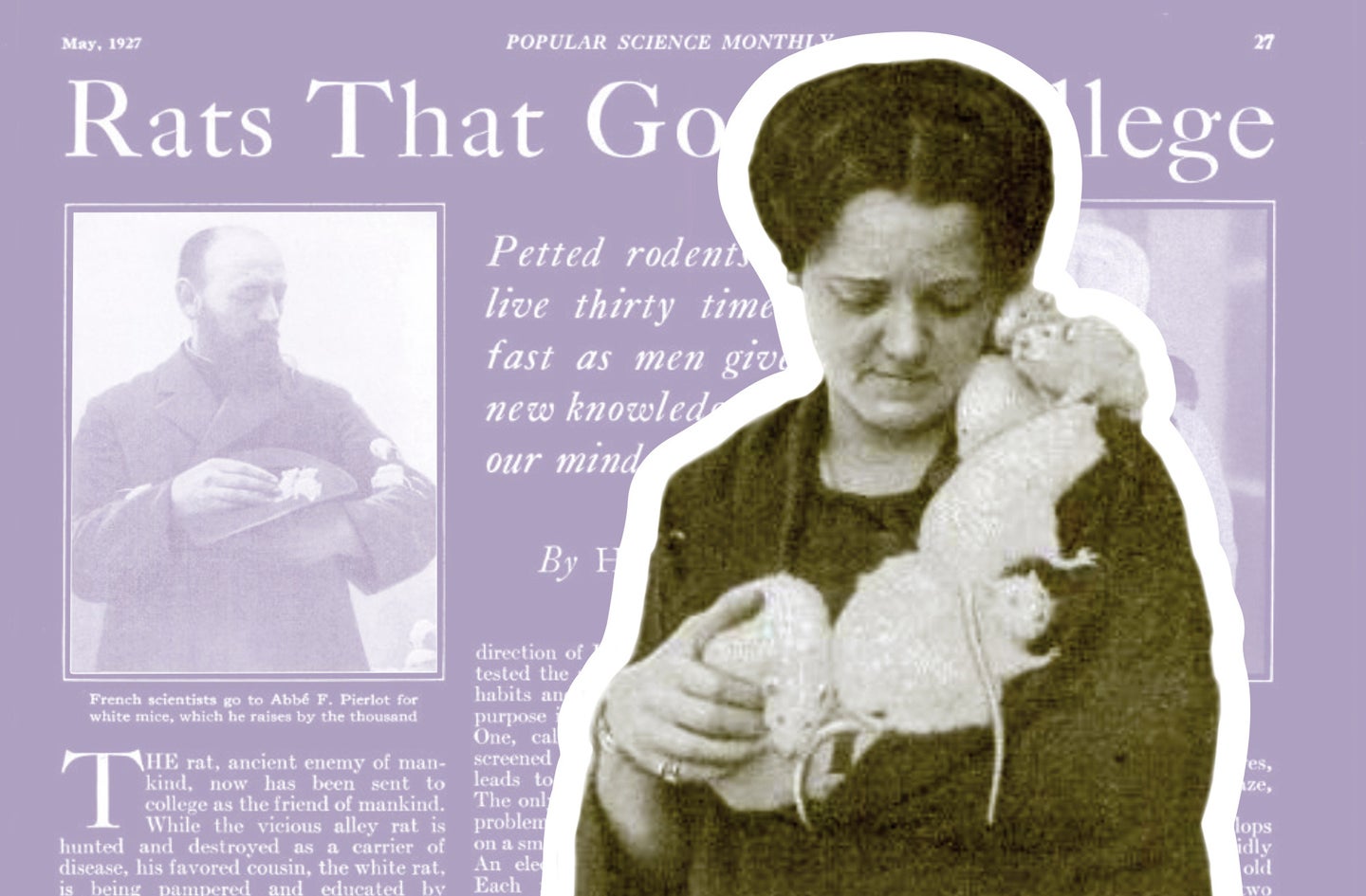 The article as it appeared in the May 1927 issue of Popular Science.
SHARE

Since Aristotle, scientists have vivisected, poked, and prodded live animals in pursuit of knowledge (Pavlov’s dog, anyone?), but at the turn of the 20th century, breeding gutter-dwelling creatures to understand our own physiology was becoming a necessity of experimentation. By the 1920s, lab rats were in such high demand that they powered an entire American industry. In fact, some of today’s popular rodent breeds—Jax mice being a favorite—can trace their roots to the Jazz Age.

Since the passage of the US Animal Welfare Act in 1966, the use of larger critters has steadily dropped—only 800,000 in 2019—but rats and mice continue to be on trend. The US uses more than 100 million of the rodents annually, many genetically engineered for laboratory perfection. This story, penned by H.C. Davis in our May 1927 issue, chronicles the emergence of their furry white ancestors.

The rat, ancient enemy of humankind, now has been sent to college as the friend of humankind. While the vicious alley rat is hunted and destroyed as a carrier of disease, his favored cousin, the white rat, is being pampered and educated by science in remarkable experiments calculated to make the human race healthier, happier, and wiser.

At Stanford University in California, 500 white rats—carefully bred, fed, and housed—recently have undergone intelligence tests which may lead to valuable discoveries about our mental processes. And in the Crocker Laboratory of Columbia University, some 9,000 pedigreed members of the same rodent family are being studied to learn new secrets of heredity and to gain useful knowledge in combating disease. Indeed, scientific institutions throughout the world today are calling for these long-tailed creatures in such quantities that the raising of well-bred rats on a large scale has been established as an unusual American industry.

In Philadelphia, the Wistar Institute of Anatomy and Biochemistry maintains $60,000 worth of special equipment for rearing thousands of the rodents to serve mankind. From there they are shipped to laboratories in many parts of the world.

The chief reason the white rat has become the chosen friend of scientists is that in structure, growth, and bodily processes he resembles human beings. Therefore his reactions to physical and intelligence tests can be counted on, relatively, to throw light on our mental and physical machinery.

In the study of habit, for example, the Stanford experimenters, under the direction of professor Calvin P. Stone, have tested the ability of rats to acquire new habits and to break old ones. For this purpose ingenious devices are employed. One, called the “problem box,” is a screened enclosure from which a door leads to another box containing food. The only way the rat, imprisoned in the problem box, can reach the food is to step on a small platform at the side of the box. An electric current releases the door. Each rat under examination is put through this test once daily for 20 days, and a record is made of the time required to open the door. The records show the rate at which habit is formed. In addition, the test is repeated after a lapse of 50 days to determine ability to retain the habit.

Another apparatus, “the maze,” consists of a labyrinth containing many blind alleys but only one direct path to the end, where food is placed. In repeated tests, the number of false moves, and the time required to thread the maze, measure ability to learn.

It has been found that the rat develops physically about 30 times as rapidly as a human. … The tests further indicate, according to Stone, that the rat’s mental development will prove to be fifty times as rapid as man’s.

In the study of heredity rats have proved most valuable. To observe four human generations would require the better part of a century. In two years, rats have told the same story, for the laws of heredity governing the rat family are fundamentally the same as those governing human life.

Recently laboratory rats have helped show how science can exterminate their plague-carrying dock and alley kin. A bacterial culture, known as “ratinin,” has been discovered that kills rats but does not harm humans or domestic animals. Placed on bait, it spreads an epidemic among the rodents.

Raised in spotlessly clean surroundings, his hours of sleeping, eating, and exercising as carefully regulated as a baby’s, the rat that goes to college is an aristocrat. He enters a university in the pink of condition for any test. “Preparatory schools” such as Wistar Institute graduate “standardized” rats each one so like the rest in body and health that one testing laboratory can compare its results directly with another’s.

This text has been edited to match contemporary standards and style.